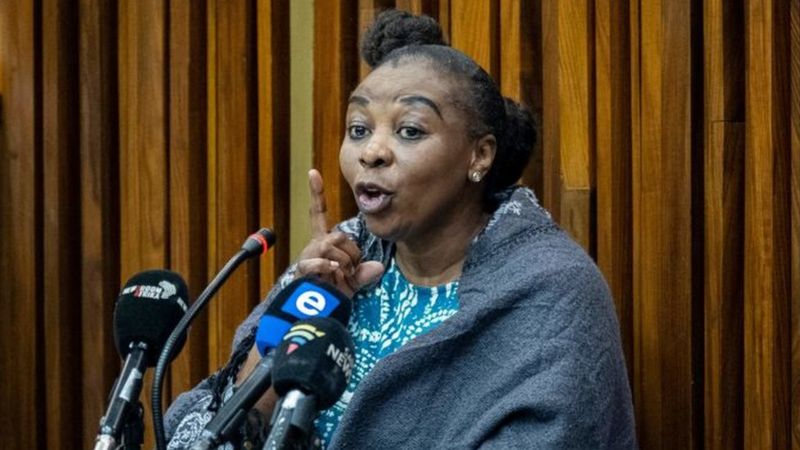 South African ex-policewoman Nomia Rosemary Ndlovu has been found guilty of killing five relatives and her boyfriend at the end of a trial that has gripped the country.

The six were murdered between 2012 and 2018, most with the help of a hitman, so she could profit from life-insurance payouts.

The 46 year old was finally caught after someone she hired to kill her sister went to the police.

She is due to be sentenced next month.


Ndlovu was also found guilty of the attempted murder of her mother, Maria Mushwana, as well as insurance fraud after having pocketed an estimated 1.4m rand ($95,000; £69,000).

Over the course of the three-month trial, the prosecution revealed how she had systematically arranged life and funeral insurance for her relatives and then had them killed.

The first person to be murdered was her cousin, Witness Madala Homu, in March 2012. Then her sister, boyfriend, niece and two nephews were all killed.

In most cases she hired hitmen to carry out the murders, but in 2013 she poisoned and strangled her sister Audrey Somisa Ndlovu herself.

The series of murders ended after she approached someone to kill another sister and the sister’s five children in March 2018.

The man she hired informed the police who then arranged a sting operation to record her talking about the plans, the Times Live news site reports.

Ndlovu was heard speaking about how she wanted the six to be burnt alive at home saying that she needed the money, Times Live says.

Throughout the trial, Ndlovu maintained her innocence, accusing many of the 50 state witnesses of lying.

But the prosecution produced evidence to show how she had been with most of her victims before their deaths and how she had benefited afterwards.

“The accused was either the last person to see them alive or the first to notice that they were missing,” state advocate Riana Williams was quoted by the AFP news agency as saying.

“She nominated herself as the beneficiary so as to cash in on life and funeral covers.”