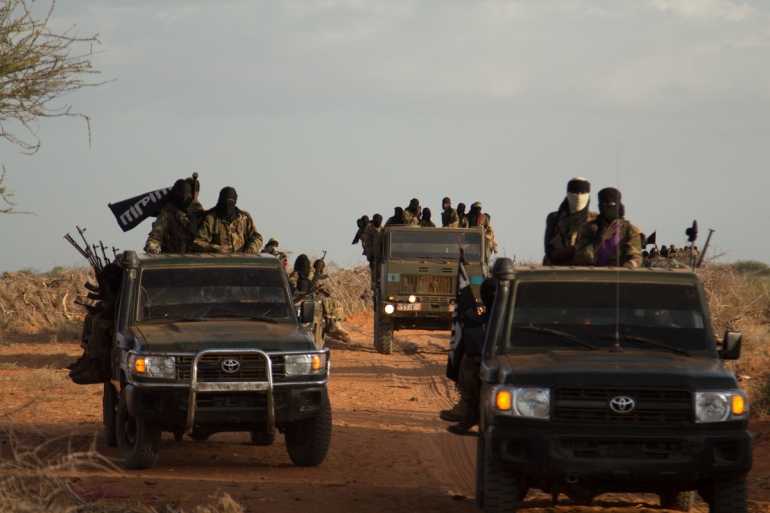 Al-Shabab fighters have killed at least 19 civilians and destroyed trucks laden with food aid in an overnight attack in Somalia’s central region.

The armed group launched the attack in the Hiran area in the semi-autonomous state of Hirshabelle in central Somalia. The trucks were transporting food supplies from Baladweyne city to Mahas town, residents said on Saturday.


“The terrorists massacred innocent civilians who were travelling … last night. We don’t have the exact number of victims, but 19 dead bodies have been collected,” local clan elder Abdulahi Hared told the AFP news agency.

“The dead bodies are still being collected, including women and children. They could be more than 20,” said Ali Jeyte, the governor of the Hiran region where the attack happened.

State news agency Sonna reported that al-Shabab fighters set fire to the trucks and “killed most of the people on board the vehicles”.

Al-Shabab in a statement said they targeted fighters from a local sub-clan that recently helped government forces and that they killed 20 “militiamen and those who were transporting material for them”, destroying nine of their vehicles.


The al-Qaeda-linked group has battled Somalia’s central government for more than a decade. It wants to establish its own rule based on a strict interpretation of Islamic law.

The group frequently launches bombings, gun assaults and other attacks on military and civilian targets.

Last month more than 20 people were killed in an attack in which al-Shabab fighters stormed the Hayat Hotel in Mogadishu, triggering a 30-hour battle as government troops sought to end the siege and free hostages.