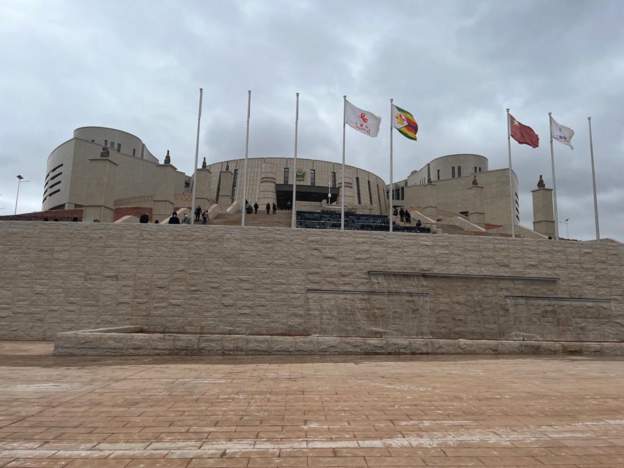 Zimbabwe’s new China-funded hilltop parliament building is complete and ready to be handed over to the authorities three-and-a-half years after construction began.

It sits 18km (11 miles) north-west of the capital, Harare, and is part of a plan to decongest the city centre.

Journalists were allowed to see the finished complex, which cost an estimated US $160 million, during a tour given by the Chinese contractors.

Five-hundred Chinese technicians and 1,200 local employees worked on the construction.

The sprawling 3.3-hectare (eight-acre) campus is a gift from Beijing and aimed at “strengthening the solidarity and friendship between the people of Zimbabwe and China”, China-Aid project manager Cai Libo told reporters.

China has been a long-standing ally of Zimbabwe. It financially and militarily backed the liberation struggle against white-minority rule, when the country was known as Rhodesia.

But China has itself now been accused of neo-colonialism and for unfairly exploiting the country’s mineral resources.

Inside the National Assembly
BBCCopyright: BBC
And inside, the national assembly, with seats for 350 MPs, is built in a circular style – a break from the current arrangement which copies the Westminster format where government and opposition sit on opposite bench.
There is also the upper house of parliament with room for 100 senators.

No date for when parliament will actually move has announced.