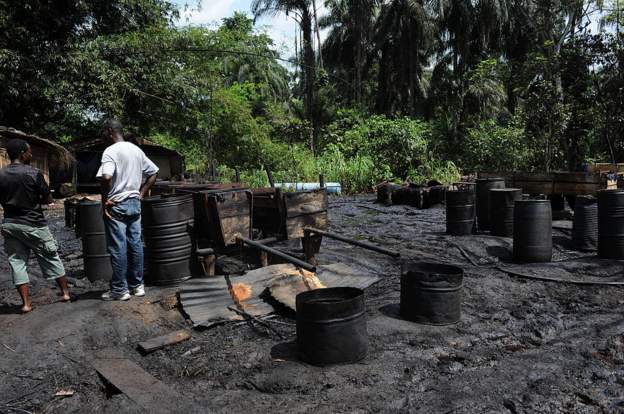 There has been public anger in Nigeria after an illegal pipeline was discovered that had been siphoning oil from a export terminal for over nine years.

The line is 4km (2.5 miles) long and runs into the sea. It was found during a clamp-down on oil theft over the past six weeks in the oil-producing Niger Delta region, the state oil company NNPCL said.

The authorities have not said whether the culprits have been arrested. It’s unclear how much crude oil had been stolen through the illegal pipeline.

Previously the Nigerian authorities said that the oil-dependent economy loses an estimated 600,000 barrels of crude everyday – roughly 30% of its output – partly due to oil theft.

Oil theft from inland pipes or from at-sea oil refineries is common in the Niger Delta, but stealing oil using a covert pipeline running into the ocean is extraordinary – and suggests a more advanced method used by the thieves.

The head of the state oil company, Mele Kyari, said that the security measures they have been taking are paying off. But outraged Nigerians on social media are asking why such a pipeline was able to operate for years undetected.