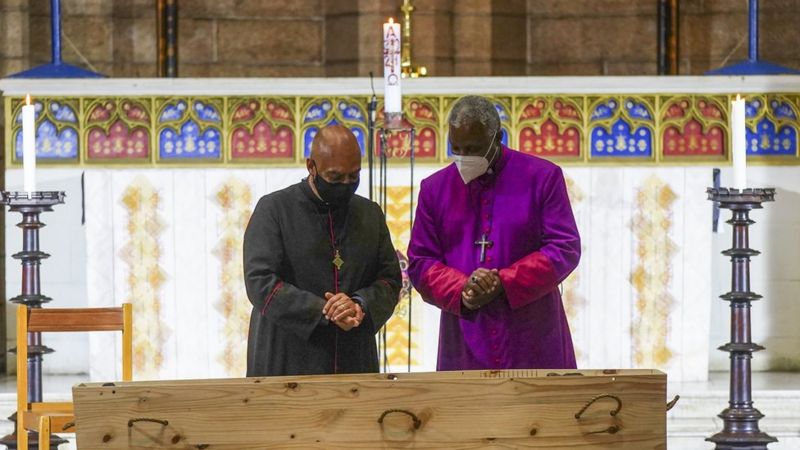 His official state funeral will be held on 1 January after the lying-in-state period, allowing mourners to file past his body and say their final goodbyes.

Large crowds are expected to visit the cathedral over the next two days.

The lying in state period had to be extended to two days, “for fear there might be a stampede”, a local priest told AFP news agency.


Priests burnt incense as Tutu’s simple wooden coffin was carried into the cathedral.

Tutu’s eldest daughter Thandeka Tutu-Gxashe, accompanied by other family elders, walked slowly behind as the coffin entered his former parish.

His frail wife Leah had been wheeled into the church earlier.

A small service was held for the family before they viewed his body.

“It’s a painful moment for Mama Leah. She is in bereavement. We need to pray for her. We need to love her and continue supporting her even though her beloved husband is gone,” Archbishop Thabo Makgoba said.


Members of the public have been paying their respects to the much-revered churchman, a driving force in the struggle to abolish the apartheid system enforced by the white-minority government against the black majority in South Africa from 1948 until 1991.

Human resources manager Amanda Mbikwana told Reuters news agency that she arrived as early as 05:00 local time (03:00 GMT) with her mother and nephews to bid farewell to Tutu, referred to by many South Africans as “Tata”, or father.

“We have known Tata’s work, he has stood up for us and we are here today in a free country to give him the honour, to celebrate his life and to support Mama Leah and the family,” she said.

People arrive at St Georges Cathedral to pay respects to late Archbishop Desmond Tutu during his lying in state, in Cape Town, South Africa, December 30, 2021
IMAGE SOURCE,REUTERS
Image caption,
St George’s is the oldest cathedral in South Africa
Memorial services are being held across South Africa while an intimate night of remembrance with his close friends will take place later.

After Saturday’s funeral, Tutu’s remains will be cremated and his ashes then placed in the cathedral, where he preached for many years.

The cathedral’s bells have been ringing for 10 minutes every day at noon since his death.

It will be a simple funeral in line with his wishes.

“He wanted no ostentatiousness or lavish spending,” his foundation said, adding that he even “asked that the coffin be the cheapest available”.