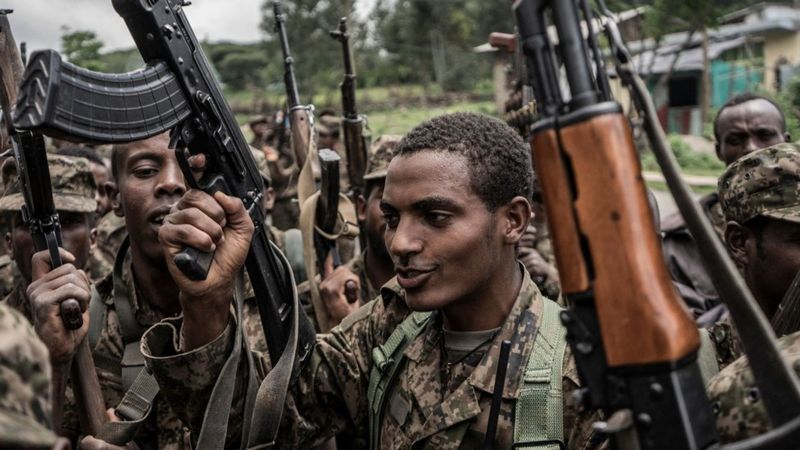 Ethiopia’s military has called on former soldiers to re-join the army, as it battles to hold off a rebel advance.

The US embassy has told all US citizens to leave Ethiopia as soon as possible amid a “very fluid” security situation.

The government has said it will continue to fight what it calls an existential war. The conflict has entered its second year, with millions displaced and more than 400,000 on the brink of famine.

This week, government officials declared a state of emergency, and called on residents to register their weapons, telling them to get ready to protect their neighbourhoods.

In a rare statement on the clashes, the UN Security Council called for an end to fighting, and reiterated their support for the African Union’s mediation efforts.

Ethiopia’s international partners have also called for an end to the hostilities.

UK Foreign Secretary Liz Truss urged both sides to agree a ceasefire in a call with Ethiopia’s deputy prime minister on Friday.

“I made clear there is no military solution and that negotiations are needed to avoid bloodshed and deliver lasting peace,” she said.

On Thursday, US Secretary of State Antony Blinken called for a ceasefire, saying the conflict “must come to an end”. The US special envoy, Jeffrey Feltman, is visiting Addis Ababa to press for a peaceful solution.


Three reasons why Ethiopia is still at war, a year since the conflict began
The new rebel alliance includes the TPLF and Oromo Liberation Army (OLA).

Speaking in Washington, a Tigrayan representative and former Ethiopian ambassador to the US, Berhane Gebre-Christos, said the aim was to oust Mr Abiy’s government by force or negotiations, and establish an interim administration.

“We’re trying to bring an end to this terrible situation in Ethiopia, which is created single-handedly by the Abiy government,” he said. “Time is running out for him.”

The OLA and TPLF have already started fighting alongside each other and this week claimed to have captured the town of Kemise, 325km (200 miles) north of Addis Ababa, on the main road from Tigray to the capital.

line
Fears of military showdown in the capital
Analysis box by Anne Soy, senior Africa correspondent
The call for military veterans to re-enlist is a sign of how seriously the Ethiopian government is taking the rebel threat.

It comes a day after Prime Minister Abiy gave a defiant message, vowing that his forces would “bury the enemy with our blood and bones”.

But recent moves by his government paint a less confident picture. It has already asked civilians to prepare to defend their neighbourhoods.

There are international efforts to avert a military showdown in the capital. But with unrelenting war rhetoric on both sides, it is looking increasingly likely.

line
But government officials dismissed the new coalition, saying it would have no support.

“They are very weak, the weakest political force in Ethiopia,” spokesman Kebede Desissa told the BBC’s Newshour programme. He said “the reality on the ground is not indicating” that rebel forces were advancing on the capital.

Fighting broke out a year ago between government troops and the TPLF, which dominated Ethiopia for decades and now controls Tigray.