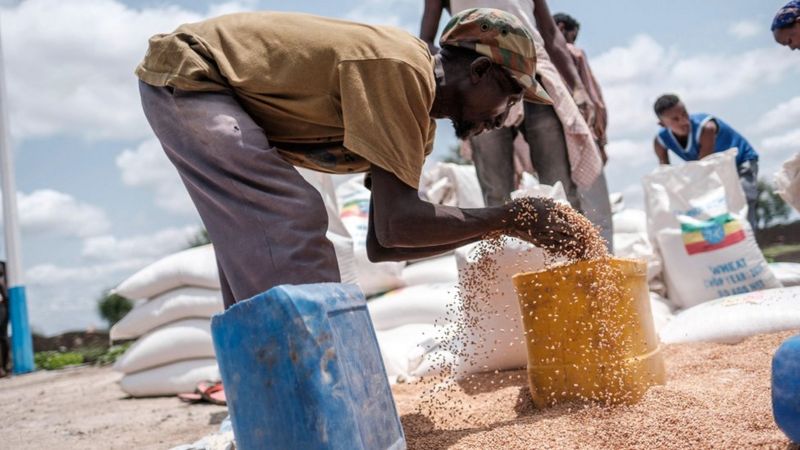 The US international development agency has blamed the Ethiopian government for a shortage of humanitarian aid in the country’s conflict-torn Tigray region.

USAID accused the government of “obstructing” access to Tigray, as it warned that food aid was set to run out this week for the first time.

Hundreds of thousands of people are at risk of famine amid the conflict between government and rebel forces.

Prime Minister Abiy Ahmed’s spokeswoman told reporters that the government was allowing aid convoys to enter Tigray, but that security was a “priority that cannot be compromised”.

“It is a volatile area so… there [are] going to be continuous checks and processes,” said Billene Seyoum.


In her statement, USAID chief Samantha Power described the flow of humanitarian assistance into the northern region as “woefully insufficient”.

She said food warehouses were “virtually empty” and that aid workers would soon have nothing to distribute.

“This shortage is not because food is unavailable, but because the Ethiopian government is obstructing humanitarian aid and personnel, including land convoys and air access,” she said.

It noted that aid trucks have been unable to leave the town of Semera in the neighbouring Afar region – currently the only accessible land route into Tigray.


The United Nations has separately told the BBC more than 100 aid trucks are stuck on this route.

About 100 trucks of aid are needed in Tigray each day, yet just 320 have managed to reach the region since the end of June, a UN spokesman told the BBC.

“Without urgent and unimpeded food assistance, there will be an imminent threat to the lives of over 400,000 people in Tigray already in famine-like conditions and over 1.8 million people now in emergency levels of hunger could slide into starvation,” he said.


When Samantha Power visited Addis Ababa earlier this month, she appeared careful not to blame any one group for the obstruction of aid, saying all sides were affecting operations.

Now, those guarded statements have been pushed to the side and she has become the first senior diplomatic official to lay the blame squarely at the feet of Ethiopia’s government.

So, what has caused this tougher statement from the United States?

The US is after all Ethiopia’s single biggest aid donor – giving the country around $1bn (£730m) per year towards health, education and development programmes.

But this apparent leverage does not appear to be working.

While in Ethiopia, Ms Power did not meet Prime Minister Abiy Ahmed and neither has the United States’ Special Envoy for the Horn of Africa during his ongoing visit to the country.

In contrast, Mr Abiy has just concluded a state visit to Istanbul where he met President Recep Tayyip Erdogan – the two signed a variety of defence and development pacts. Ethiopia it seems is looking for new friends to counter the US’ influence.

The conflict in Tigray began in November, when Mr Ahmed ordered a military offensive against regional forces. He said he did so in response to an attack on a military base housing government troops.

For almost three decades, the party was at the centre of national power, before it was sidelined by Mr Abiy, who took office in 2018 after anti-government protests.

The Ethiopian government has designated the TPLF as a terrorist group, while it says it remains the legitimate government in Tigray.