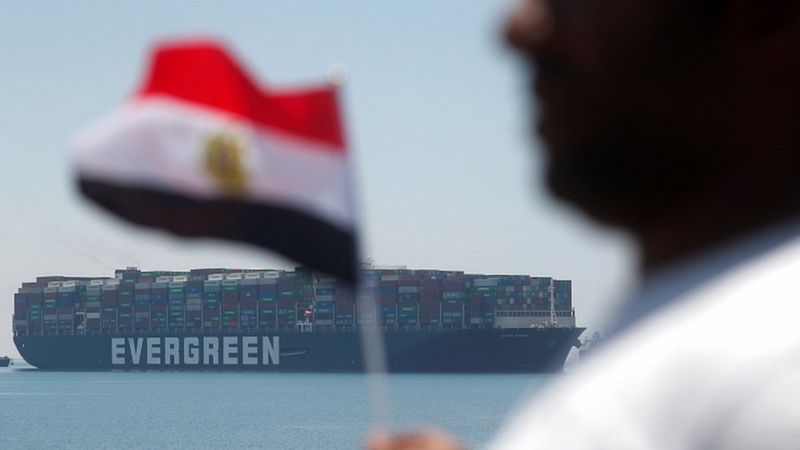 The huge container ship that blocked the Suez Canal in March – disrupting global trade – has passed back through the waterway without incident.

The Ever Given was among a convoy of vessels sailing from the Mediterranean Sea to the Red Sea, the Suez Canal Authority (SCA) said.

It had been offloading its cargo in Europe and is now en route to Asia.

The ship was refloated after a major six-day salvage operation that led to the death of one person.


It was then impounded for three months near the canal city of Ismailia while a compensation deal was agreed between Egypt and the Ever Given’s owners.


The BBC is not responsible for the content of external sites.
View original tweet on Twitter
1px transparent line
The SCA, in a series of tweets, said the Ever Given was escorted through the 193km (120-mile) canal by two tugboats and senior SCA guides.

It was one of 26 ships that travelled from north to south through the canal on Friday, while 36 ships sailed in the opposite direction, the SCA added, hailing the waterway as the “shortest and fastest navigational route linking the east with the west”.

The Ever Given, one of the world’s largest container ships, had been delivering its 18,300 containers to Rotterdam, Felixstowe and Hamburg and is now travelling to China.

A handout satellite image made available by The 400m-long (1,312ft) ship became wedged across the canal after running aground amid high winds on 23 March, blocking it for hundreds of ships and disrupting global trade.

‘I was blamed for blocking the Suez Canal’
How was the Suez Canal ship freed?
Following its release, the SCA sought compensation for the Ever Given’s Japanese owner Shoei Kisen for the cost of the salvage operation, damage to the canal’s banks and other losses.

The terms of the deal were not disclosed but Egypt had eventually settled on a $550m (£397m) demand.