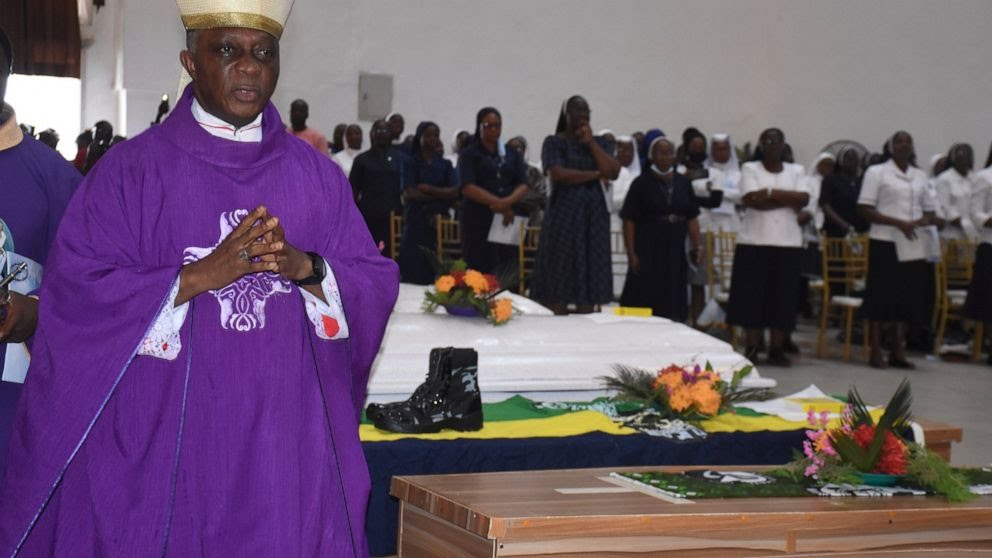 A funeral mass was held on Friday for the victims of the gun attack in early June at a church in Owo, Ondo State, Nigeria, a relative of two of the victims told CNN.
Among those paying respects to the 40 people who died was Laide Ajanaku whose parents John Adesina Ajanaku, 67, and mother Olabimpe Susanah, 64, were killed when a group of armed men stormed the congregation during a Pentecost mass the St Francis Catholic Church in Owo, south-western Nigeria.
There has been a discrepancy in the figures given to media by authorities, with a local lawmaker Adeyemi Olayemi telling CNN that nearly 50 people died in the shooting after the attackers came in on motorcycles.
Ajanaku told CNN that she counted 39 pictures in a tribute booklet created for the victims at the funeral mass.
A list of injured also showed 74 people being treated in hospital for “varying degrees of injuries,” according to the booklet.
Read More
“There are 31 with pictures and 8 empty slots for some of the victims,” she told CNN from the service.
‘They never missed Mass.’ Woman loses both parents in Nigeria church attack that killed dozens
“Some Igbo people carried their dead back to the southeast of the country. I’m still not sure how many died,” she said.
Ajanaku added that the priest paid tribute to the victims including a two year-old and a 65-year-old.
Laide described the mood as “somber,” in the packed hall adding that some distraught relatives were rolling on the ground and some are crying in the hall.”
Ondo State Governor, Rotimi Akeredolu, and a former governor of the state, Olusegun Mimiko, were among the dignitaries present at the mass.
After the shooting, Pope Francis offered prayers for the victims who were “painfully attacked at a time of celebration,” a statement from the Vatican said.
Lethal attacks by motorbike-riding gangs are rare in southwestern Nigeria. Such attacks are more widespread in large parts of the country’s north, which is constantly under siege by Boko Haram terrorists and marauding gunmen known locally as ‘bandits.’
The Owo church attack happened after another church tragedy when 31 people were killed and others injured during a stampede at a church event in the south-eastern Nigerian city of Port Harcourt.