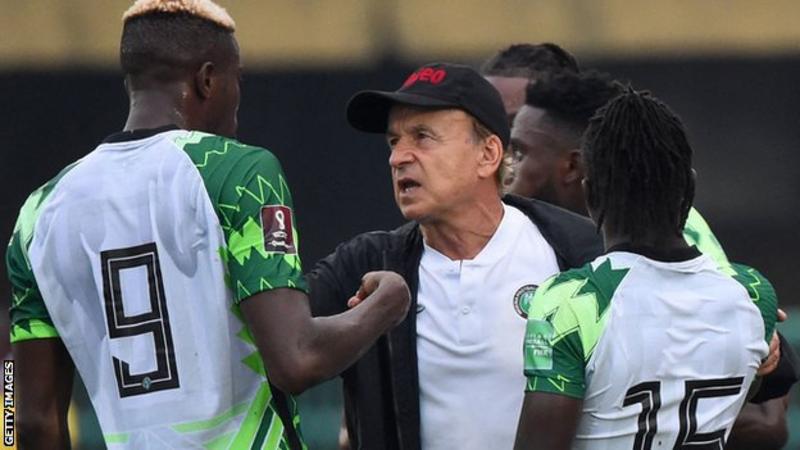 Gernot Rohr wants the Nigeria Football Federation (NFF) to settle its outstanding debt to him, but his former employers insist he will not have to wait long to be paid.
The 69-year-old was sacked as Super Eagles coach in December before the delayed 2021 Africa Cup of Nations kicked off in January, prompting Rohr to go to football’s world governing body Fifa to seek compensation for unfair dismissal.
A Fifa tribunal ordered the NFF to pay the Franco-German about $380,000 in May, adding that the NFF would be sanctioned if Rohr was not paid in full within 45 days.
“I received part of the payments from Fifa but not everything has been paid,” Rohr told BBC Sport Africa.
“The ruling already said the interest must be paid, now we are waiting for the outstanding with the interest.”
The financially-stricken NFF attributed the delay in payment to their precarious financial situation, hence the body decided to utilise a percentage of its Fifa development funding to clear Rohr’s debt.
A top NFF official said the latest remarks from Nigeria’s longest-serving manager are understandable – but stressed Rohr will be paid his outstanding $127,800.
“We agreed to this mode of payment (Fifa development fund) with Fifa to enable us clear the debt,” the official, who preferred to remain anonymous, told BBC Sport Africa.
“The NFF received a letter through his lawyer that he wants to be paid the outstanding and additional interest, which is understandable.
“Rohr refused to tell the media that he was paid over $250,000 and that the outstanding is actually $127,800, but this is normal. We are very optimistic that he will be paid soon and this case will be closed.”
However, Rohr, who somewhat brought stability to Nigeria’s often volatile national side in over five years in charge, said Fifa’s ruling to add on interest in his compensation package must be respected.
“Yes [it is the amount quoted] but it’s a little more than the sum now. There are also interests that have to be paid,” he said.
“We are talking about it in dollars amount, which has increased and this is what Fifa said in the ruling.”
Compensation follows fall-out of World Cup exit

Nigeria failed to qualify for this year’s World Cup, being eliminated by fierce West African rivals Ghana
Rohr was was highly praised for rebuilding Nigeria between 2016 and 2018, but nervy and lacklustre performances in more recent years and his conservative approach were heavily criticised by the local media and fans.
Despite leading the Super Eagles to both Africa’s 2022 World Cup play-offs and qualification for this year’s Nations Cup finals, he came under fire for poor results against lower-ranked opponents during qualifying for Qatar.
Rohr, who guided Nigeria to the 2018 World Cup and to third place at the 2019 Nations Cup in Egypt, was subsequently replaced by Augustine Eguavoen.
His successor led the team to the last 16 in Cameroon this year, and was then tasked with reaching the World Cup finals in Qatar.
But Nigeria were eliminated on the away goals rule following a 1-1 draw with Ghana in Abuja in the second leg of their play-off in late March.
Eguavoen stepped down from the job as coach, while the rest of his coaching staff were dismissed.
Fifa’s order to pay Rohr compensation comes after the NFF were fined $154,000 for crowd trouble following their draw against the Black Stars.
Portuguese coach Jose Peseiro has since taken over as Nigeria coach, and has made a perfect start in qualifying as the West Africans seek a spot at the 2023 Nations Cup in Ivory Coast.