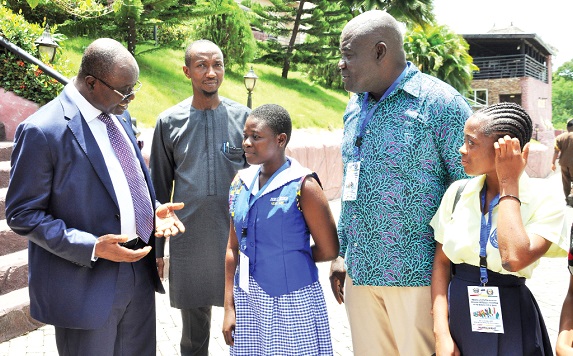 The implementation of ECOWAS protocols is more relevant now than before, a Deputy Minister of Foreign Affairs and Regional Integration, Kwaku Ampratwum Sarpong, has said.
He said attaining that vision was not an illusion, since it was part of the regional body’s objective of ensuring cooperation and integration.

According to him, ECOWAS functioned on the pillars of peace and security, infrastructure development and policy harmonisation for the facilitation of trade and good governance, adding: “These pillars can be fully achieved on the bedrock of regional integration.”

Mr Sarpong said this at a two-day sensitisation workshop on ECOWAS protocols and conventions in Ho, the Volta Regional capital, on May 5, 2022.

Participants discussed topics such as functions of the Integration Bureau, an overview of ECOWAS (history, structure and institutions), the protocol on democracy and good governance.

Others were the protocol on free movement, the right of residence and establishment, transhumance, the ECOWAS Brown Card and trade facilitation.

The rest were a common external tariff, the role of civil society, the private sector, the media and traditional authority.


The workshop was jointly organised by the Ministry of Foreign Affairs and Regional Integration, the Volta Regional Coordinating Council and Media Response, an NGO.

Mr Sarpong said the ECOWAS protocol on a borderless sub-region was achievable if member states demonstrated more commitment to peace and security in their respective countries.

He said the coups d’état in Burkina Faso, Guinea and Mali were of great concern to ECOWAS member countries because such upheavals undermined peace in the entire sub-region.

Mr Sarpong, therefore, urged Ghanaians to work towards sustaining the prevailing peace in the country to safeguard its growing democracy.

He further said ECOWAS, which was formed in 1975, had performed well in the area of the free movement of people across the region, hence the need to ensure the borderless region objective was realised.

In the area of trade integration, he said there had been some improvement, adding that member states could “join hands to exploit the comparative advantage of integrated economies to achieve better outcomes by using their resources more effectively”.

The Volta Regional Minister, Dr Archibald Yao Letsa, said no country had ever developed without any form of interdependence with other nations.

He said even though the objectives of ECOWAS had not been fully met, almost four decades since its formation, appreciable efforts had been made to create a borderless sub-region to enhance free trade and movement of people.

Dr Letsa said there was the need for the people to have adequate knowledge and understanding of the protocols and conventions of the community to enable them to benefit from the implementation of the protocols.