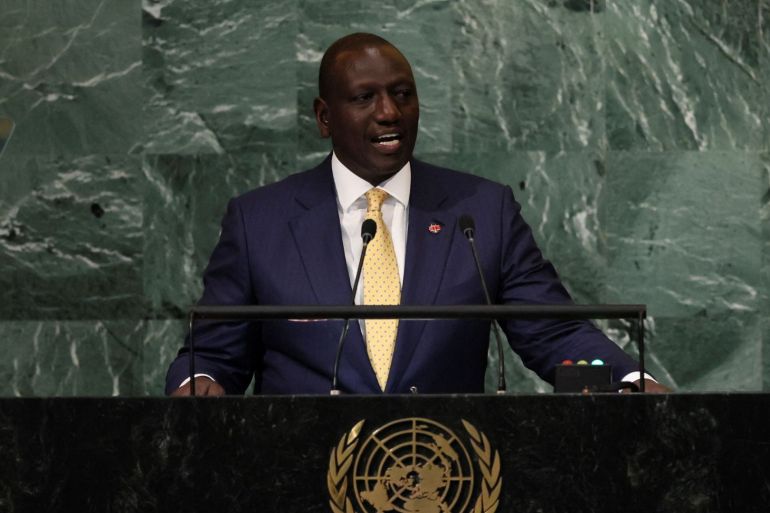 Ruto on Wednesday called the mission “necessary and urgent” for regional security and said he and the DRC’s president had agreed on how Kenyan forces would work with Congolese and other forces on disarming rebels and peacekeeping in the country’s troubled east.

KEEP READING
list of 4 items
list 1 of 4
UN troops in DRC make ‘strategic withdrawal’ from key army base
list 2 of 4
US imposes weapons-related sanctions on ISIL members in Somalia
list 3 of 4
Thousands join anti-Rwanda protests in DR Congo’s Goma
list 4 of 4
Nigeria ups security as US orders diplomats’ families to leave
end of list
The Kenyan forces will be based in Goma, eastern DRC’s largest city. The East African Community regional force, agreed upon by heads of state in June and led by a Kenyan commander, also has two battalions from Uganda, two from Burundi and one from South Sudan.

Nairobi made its troop commitment a day after angry crowds set fire to United Nations vehicles in Goma as frustrations mount over the advance of M23 rebels and the deteriorating security situation in the eastern DRC.


Violence by armed groups has led to a diplomatic crisis between the DRC and neighboring Rwanda. The DRC has accused Rwanda of supporting the rebels, which Rwanda denies. Meanwhile, it has accused the DRC of backing another rebel group hostile to Rwanda.

In October, Kinshasa expelled Rwanda’s ambassador to the DRC.

The UN vehicles were targeted in Goma over false rumors that the peacekeeping mission known as MONUSCO had transported rebels, adding to the dissatisfaction many people in eastern DRC have towards the troops.

Sign up for Al Jazeera’s Newsletter
Week in the Middle East
Catch up on our coverage of the region, all in one place.
E-mail address
Sign up
By signing up, you agree to our Privacy Policy
“Because of these rebels, we have fled our homes in Rugari, Kibumba,” protester Kasereka Munyafura said, standing next to a truck on fire. “That is why we are angry, and we have just burnt the vehicles of MONUSCO because it makes us suffer.”

Earlier on Tuesday, the UN peacekeeping mission had announced a “strategic and tactical withdrawal” from embattled Rumangabo. The M23 rebels have been trying to advance on the town, where a military base is located.

The M23 rose to prominence more than a decade ago when its fighters seized Goma, which sits along the border with Rwanda. After a peace deal, many of M23′s fighters were integrated into the national military.

The group took up arms again in November last year, saying the government had failed to live up to its promises. Over the weekend, the rebels doubled the territory they hold, seizing control of two major towns.