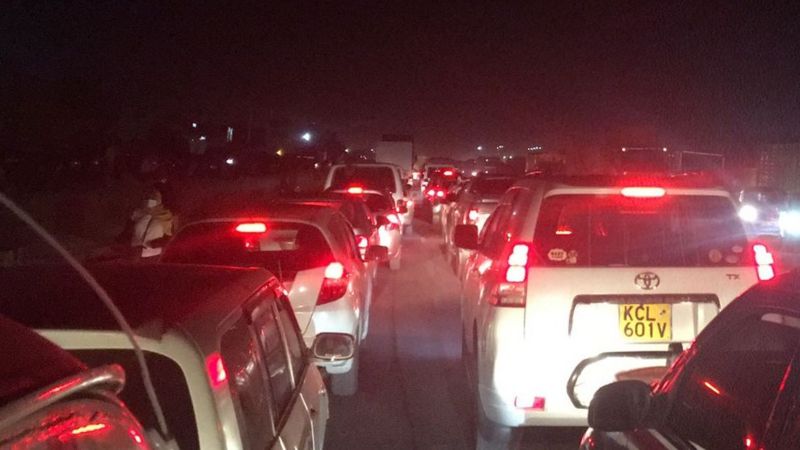 Frustrated drivers in Kenya have been venting their anger after spending hours overnight in an enormous traffic jam in the capital, Nairobi.

“Ridiculous that I’m getting home at 4am” after an 11-hour journey, tweeted lawyer Pauline Otsyula.

Other commuters explained that they arrived home in the early hours just in time to leave for work once again.

Nairobi is notorious for its traffic jams but Thursday night saw the worst many residents can remember.

One tweeter said that people had parked at the roadside to sleep in their cars.

Communications specialist Anthony Ndiema commented that someone could have taken a flight to Doha and done two hours of work in the time he took to get home.

The gridlock happened on a stretch of road where a massive new expressway is being built but the traffic jam was reportedly made worse by a road accident.

Some called for the contractors to provide alternative routes while the work was being carried out.

While Gerald Ngui urged businesses to let their employees who lived in the area work from home. “It’s the humane thing to do,” he said.

The road construction is part of the $550m (£410m) project aimed at providing a fast road linking cities north-west of the capital to the country’s main international airport.

On completion, it will stretch 27km (17 miles) across Nairobi and it is meant to ease traffic flows in and out of the centre of the city.

It is being financed and constructed by the China Road and Bridge Corporation (CRBC) – and the Chinese firm will operate the highway under a public-private partnership.

The stretch of the road most affected on Thursday night connects the city centre to highly populated suburbs in the east.