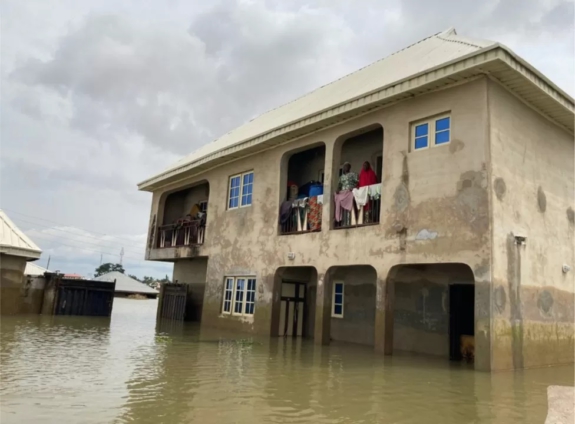 Nigeria is suffering its worst flooding in a decade, forcing 1.4 million people from their homes. The central city of Lokoja is in one of the worst-affected areas – Kogi state – and residents here are doing their best to cope.

For the past three weeks, Mohammed Sani Gambo has been using a canoe to get into his home.

The fisherman and father of 11 is one of the lucky few in his neighbourhood of Gadumu. Living in a two-storey building meant he was able to move his family and belongings to the top floor, away from the flood water.

“When the water first started rising we thought it wouldn’t be this serious”, he says, “but by the next day the whole place was flooded.”

Nigeria floods: Braving the rising waters in Kogi state
Mohammed Sani Gambo uses this canoe to get around his neighbourhood
There are now 27 people living in two rooms at the top of his house. They are squashed between mattresses, sofas, pots and pans – anything they could carry away from the rapidly rising water.

“Not everyone living here right now is my family,” he adds. “I also took in some neighbours that had no places to go. I couldn’t leave them out there, so I took them in.”

He has lived in this area for over a decade and is used to the flooding, but this year has been different.

Kogi state is no stranger to seasonal flooding.

Its capital, Lokoja, is at the confluence of two of West Africa’s biggest rivers – the river Benue and the river Niger. During the rainy season the rivers overflow their banks, causing flooding.

“One of the factors why it’s worse, is that people continue to build in water plain areas,” says Abdulahi Abubakar, the Red Cross’ acting secretary in Kogi state.

“As soon as the flood subsides, people go back to the same places and block water channels.”


He says they’ve been advising the government to relocate people on a permanent basis so they can move out of floodplains.

Mr Sani Gambo says he and his family would like to move but have nowhere to go.

“When we built this house our farm was doing well, things were good – but now things are not as good as before, the economic situation has changed, we can no longer build a new house. Even buying land now is very difficult.”


His neighbour, Alami Ibrahim Yunus, also wants to move out but cannot afford it. She became a widow when her husband died from coronavirus and she says she does not have the means to rebuild or to fix her house.

Nigeria floods: Braving the rising waters in Kogi state
Alami Ibrahim Yunus cannot afford to repair flood damage to her home
Nigeria’s economy has taken a beating over the past year.

Despite historically being Africa’s largest oil producer, its output has been affected by pipeline theft in the oil producing Niger Delta.


Inflation is also at an all-time high and many ordinary Nigerians are struggling to make ends meet. This flood will only add to communities already struggling to cope.

The World Food Programme and the UN’s Food and Agriculture Organisation said last month that Nigeria was among six countries facing a high risk of catastrophic levels of hunger.

Experts there say the causes for Nigeria’s seasonal flooding are complex, and include poor infrastructure and erosion, but that climate change is adding to the issue.


With further heavy rains forecast, the situation in Kogi state remains precarious and the existing flood waters are not expected to recede for another month.