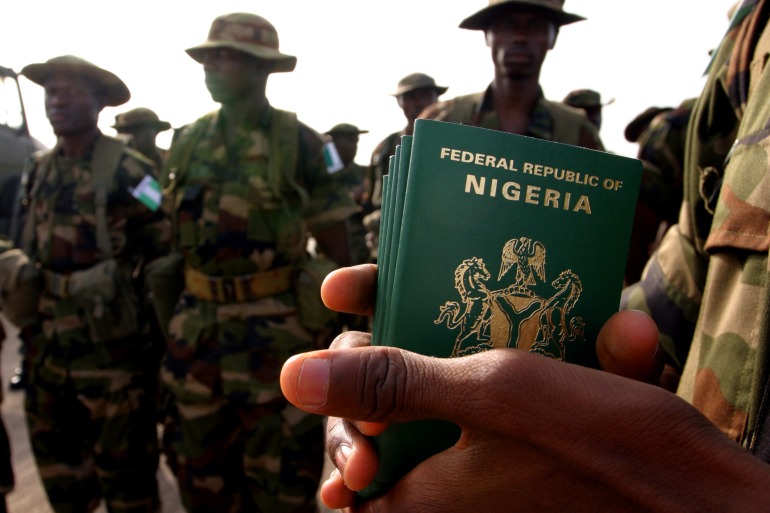 Ilorin, Nigeria — In September 2021, when Akpos Malafakumo walked into the Nigerian Immigration Service (NIS) office in Yenagoa, Bayelsa, to apply for a new passport, she had no idea it would take 10 months to get it.

It was not until mid-November that Malafakumo was called in for biometric capturing. Six weeks later, when she had still not been notified that the passport was ready, she went to the office to complain in December 2021.

“I was getting worried already … because I was applying for a graduate school outside the country and most of the applications needed my passport number,” she said.

In 2017, the NIS banned cash payments ostensibly to make the process of getting or renewing passports nationwide as efficient as possible and phase out middlemen. Two years later, it introduced e-passports to curb forgery.

But citizens say these measures have instead worsened the situation at immigration offices within Nigeria and abroad and left a long line of people waiting for passports to be issued.

Nigeria does not produce its own passport booklets despite owning a minting and printing company. And immigration officials have been repeatedly accused of bribery and corruption – hoarding booklets and introducing arbitrary charges to line their pockets.

“Nigeria is this interesting test case where the application of technology to the delivery of government services often worsens the experience for citizens and taxpayers rather than enhancing or easing the process of accessing government services,” said Ikemesit Effiong, head of research at SBM Intelligence, a Lagos-based geopolitical risk advisory firm.

A 2021 survey by SBM Intelligence indicated that the international passport is the least owned government identification in the country because it was too stressful to obtain. Less than a tenth of the 6,954 respondents had it.

Meanwhile, a declining socioeconomic situation and increasing insecurity in the country have spurred an immigration wave and further increased the demand for passports.

A 2021 report by the Africa Polling Institute found that seven in 10 Nigerians want to move abroad. Data from the UK government placed Nigeria third on a list of countries granted sponsored study visas in “the year ending June 2022” with an almost two-thirds increase from its 2019 figures and the largest recorded change all year.

The manufacturing and contracting issues have led to a racket within the system, according to analysts like Effiong.

“Not many Nigerians can afford to travel internationally,” he told Al Jazeera. “So the demands that underpin the passport issuance and renewal process is a unique market populated by certain kind of Nigerians who [believe] having the resources to be able to afford international travel means [people] can afford exorbitant charges.”

The lags have halted travelling plans for many looking to leave Nigeria. Overseas, it has delayed the plans of many looking to travel back home. In Rome, one man complained that immigration officers were issuing passports without appointments and demanding unofficial fees; his wife reportedly paid a 200 euros ($195) bribe.

“It is frustrating for those in the diaspora,” said Tope Fasua, Lagos-based political commentator and consultant. “Even if they are there and unable to regularise their papers, at least let them be able to have their Nigerian passports.”


After months of being told by the authorities that there was a passport booklet shortage, Malafakumo gave up trying.

“I think they have booklets and were only using it for the highest bidders,” she told Al Jazeera. “I watched people from other states who paid 100,000 naira [$250] get their passport on the same day.”

“I feel really hurt,” she said. “I actually got admission into one school in Ireland and they offered me funding. I needed my passport number to move forward with it but I didn’t get it. I wrote to them and they said the passport was the only means of identification for them.”


‘You have to know someone’
Selina, a Lagos resident who asked for anonymity for fear of retribution, applied for passport renewal online in December 2021 and is still waiting. Every time she goes to the immigration office to track its progress, officials keep telling her to contact “the person helping her”.

“It has been frustrating and depressing,” she said. “Everyone expects I should have a certain someone who is helping me. When I tell them I did it online, I get the ‘ohh’ look and then the term ‘self-service’ follows me everywhere I turn to for help,” she recounted to Al Jazeera. “As they move my file from one officer to the other, they start with ‘it’s self-service’ like I am the enemy.”


The need for insider help has given leeway to middlemen who know people in the immigration service to make profits. Uthman (who refused to give his real name), who hawks this service on social media, told Al Jazeera that he gets a commission of at least 5,000 naira ($13) and the remaining sum goes to the officers who do the work.

“If we are in a country with a good structure, what I do is illegal but the officers are not ready to work and they only attend to those who bribe them,” Uthman said. “I don’t see it as work or business. I am just helping people.”


No proper punishment
Analysts say the NIS suffers from the same structural issues as other government agencies, bureaucratic processes, being understaffed and paying little remuneration, thus creating an incentive for corrupt practices.


“What this all means for Nigerians is that they are now in a more disadvantageous position in terms of accessing and utilising global opportunities that comes their way,” said Effiong. “And there seems to be very little political will on the part of the government to actually ease this process.”

A lack of incentive to encourage best practice or proper punishment to dissuade unethical behaviours have been cited as reasons for lax standards in immigration offices.

“It is another low for us but one may not be surprised any more given that Nigeria is very adept at ploughing those lows and invariably disgracing ourselves all over the world,” Fasua said. “The government needs to punish some of the bad guys in immigration, even if you have to sack them,” he added.

Still, more Nigerians continue to apply for their passports comfortable in the knowledge that they may not get it anytime soon.

“This is not a normal thing, it is abnormal. People should not be frustrated for wanting to get a passport,” asked Malafakumo, who got her passport this June. “There should be a straightforward way to do these things. Why should I beg for something I have paid for?”