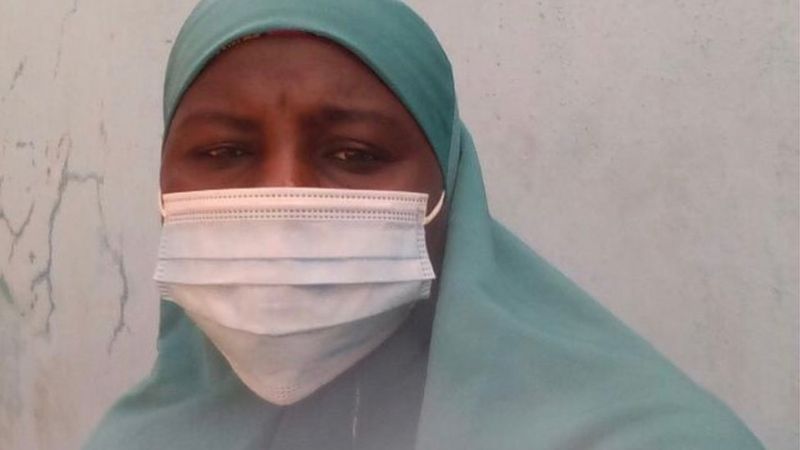 More than 300 children kidnapped from school are still in the hands of criminal gangs in Nigeria, with many now missing for nearly two months. Some of those abducted are just two years old.

While many of the more than 1,000 children taken have been released, often after extortionate ransom amounts were reportedly paid, hundreds of families are still desperately waiting for news of their children.

Some parents spoke to BBC News about the anguish they are experiencing and shared their thoughts about the struggle to educate children in the face of such danger.

Short presentational grey line
‘They are the children of nobodies’
Hadiza Hashim is the mother of five children marched at gunpoint out of the gates of an Islamic school in Tegina, Niger State, on 30 May, when 134 students were kidnapped.

The two youngest, Walid and Rahama, are just two and three years old. They were later released along with other toddlers who were too small to walk. But their three elder siblings remain in captivity.

The eldest, Umma, is just 13 and loves watching cartoons like Tom and Jerry with her younger brothers and sisters. Wracked with anxiety, her mother has not heard from them since the kidnapping.


The day of the abduction, a Sunday, she describes rushing to the school after hearing gunshots. Forced to take cover for her own safety, from her hiding place she saw dozens of armed men enter the school.

“They broke the padlock and started shouting for the children to remove their shoes, to prevent them from running away. The children started screaming for their parents.

“I saw my two-year-old carried by a man with a gun. He was shouting at the boy to shut up because he was screaming for me, his mother. I couldn’t do anything,” Mrs Hashim says.

Map
1px transparent line
The two younger children are traumatised by the experience. Mrs Hashim describes how they wake up in the middle of the night screaming, terrified they will be taken again. They keep asking where their elder sisters and brother are, why their beds remain empty.

Mrs Hashim teaches science in a nearby junior school, now closed because of the insecurity caused by criminal gangs. The kidnappers have reportedly asked for the equivalent of more than $100,000 (£73,000) for the children.

Parents of the missing children are desperately trying to raise funds, but a schoolteacher’s salary in the area is less than $400 a year, making the sums demanded far beyond their reach.

She fears her children are being forgotten because they are poor.


‘It is crucial that they get their education’
On 17 June, more than 80 students were kidnapped from a federal government boarding school in Birnin Yauri, Kebbi State.

Aminu Umar’s son Mustapha is 14 – the eldest of five children. His family live more than 200km (124 miles) away from the school, but desperate to prioritise his son’s education, his father thought this boarding school would offer him the best start in life.


Just a week before the abduction another parent withdrew his son from school after reports of criminal gangs operating in the area.

He tried to persuade Mr Umar to take Mustapha away too, but his father wanted him to sit his exams and was reassured by teachers who told him the students were safe.

“I trusted them with my child. Now I can’t sleep normally since the kidnapping, I’m always wondering what sort of conditions the children are being kept in, how they are sleeping and if they are able to get clean water and enough food,” Mr Umar says.

He adds they have heard very little from the school or the government since the kidnapping and he is desperately worried his son will be harmed.

But, while his wife has begged him to take Mustapha’s brothers and sisters out of school, he is adamant that his children should continue with their studies.

According to Unicef, more than 1,500 schools have been forced to close in central and northern Nigeria because of the insecurity. But Mr Umar believes the solution to the insecurity lies in education.

“People are withdrawing their children from schools across the state. But we’re already backwards in terms of education, so this will cause even more problems in the future,” Mr Umar says.

“My wife is tortured by worrying about the safety of our children but I believe it is crucial that they get their education.”


‘Without security there is no education’
On 5 July, 120 students were kidnapped from Bethel Baptist High School in Kujama, Kaduna State.

Nathan Joseph Kopzuma, 14, hopes to become a civil engineer. An avid reader, he loves learning about science at school.

Since the day he was kidnapped his father, a pastor, says he has not heard from him. The only news has come through the school authorities who are in touch with the kidnappers.


“As parents, we are traumatised. We want to do something to intervene, but we are helpless. We can’t fight them ourselves, we can’t go there and we don’t know where the children are. We are dejected.”

Reverend Joseph Kopzuma Hirdima says he has begged for the government to assist them to help rescue the children and bring them home. But with little progress, he says they have no alternative but to pray for God to intervene.

Rebecca Bulus, whose 13-year-old son Joseph was taken from the same school, described the shock of hearing that her son had been kidnapped: “The moment I heard, my world turned upside down. I nearly fainted, I’ve never wept like that – I wept bitterly for days. I can’t describe how painful it is.”

Since they were taken, all she has been told is that the children are alive.

She describes Joseph as a jovial, musical boy, who sings in the church band and plays the drums and piano. He is the second of four children, and despite being at boarding school, he remains close to his younger siblings at home and calls regularly to speak to them.

Ms Bulus says her youngest children, still in primary school, are devastated and struggling to understand what has happened to their brother.

The kidnappers have demanded a large ransom for the children. The family are trying to raise the funds needed, but it is a huge financial pressure.

Ms Bulus’ husband is a church pastor and she teaches at a nearby junior school, but just three months ago she lost her job. Now the family have had to ask relatives to help support them to raise the money.

Joseph’s parents are trying to raise money to pay the ransom
“We need security. Without that, there is no education. My eldest is also in boarding school and I’m worried about his safety. We are on the point of withdrawing him from school. We need to have peace in our country first – education can follow when that’s been achieved,” she says.