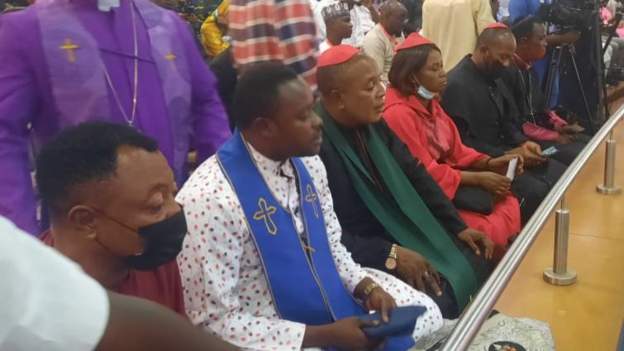 A row has broken out between the Christian Association of Nigeria (Can) and politicians from the ruling All Progressives Congress (APC), over the identity of “bishops” at the party’s event on Wednesday.

The APC was unveiling Kashim Shettima, its vice-presidential candidate in the 2023 presidential election, but it was the presence of more than 20 people in Christian religious robes that overshadowed the event.

The choice of Mr Shettima as running-mate had stirred heated debates since it was first announced, as Bola Tinubu, the APC’s presidential candidate is also a Muslim.

Many Nigerians are enraged that Mr Shettima’s choice goes against a tradition of balancing the faiths in a country where the population is split between Christians and Muslims.

Mr Tinubu had said Mr Shettima was chosen as a matter of “competence”, and the presence of the “bishops” at Wednesday’s event was seen as a show of solidarity.

One of the so-called bishops told the BBC that they are from the Nigeria College of Bishops.

But the Christian association said it did not know the bishops, and described them as fake.

Joseph Hayab, Vice President of Can, told the BBC that Christian bishops “have a dressing style”, and that the men at the APC’s event had “not [been] properly trained” for the job they had been hired to do.”

Videos on social media showed some of the men changing into their cassocks at the car park. Also, people of orthodox faiths have pointed out that the robes worn by the men were usually reserved for certain special occasions.

However, Bayo Onanuga, a Bola Tinubu Campaign Organisation spokesman, said the clergymen were not fake but largely unknown because they are not “big names in Christendom yet”.

“We want to say that those clergymen were not fake, not mechanics or yam sellers as the purveyors of hatred have made Nigerians to believe in the social media,” he said.