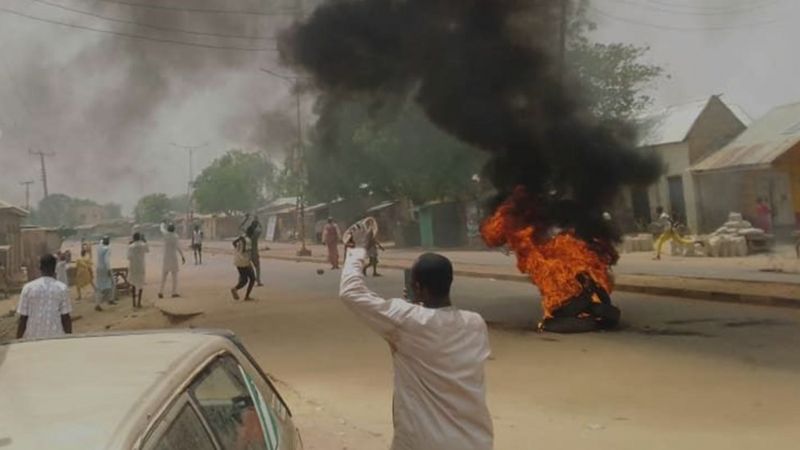 Some videos were genuine, such as this one
After the killing of Deborah Samuel, a Christian, second-year student in the northern Nigeria city of Sokoto on Thursday for alleged blasphemy, fake news and disinformation have been widely shared on social media.

A war of words erupted on Twitter and Facebook between some Muslims and Christians in the country, with each side accusing the other of intolerance and extremism.

Two days after the killing, a peaceful protest in Sokoto turned violent, with demands for the release of the suspected killers of Ms Samuel.

A plethora of fake pictures, videos and posts have been shared by social media users to incite violence and cause further damage and division in the country.

Many of the fake stories are accompanied by comments on why Nigeria should be divided between the predominantly Muslim north and Christian south.

Facebook user Emeka Fans Page posted a video in which he makes many claims, one of which is “Sokoto people done butcher all the whole Christians in their state”.

His video has been viewed over 670,000 times and shared more than 5,000 times. He also urges his followers to continue sharing the video.

A police statement said two protesters were shot by the police when they tried to occupy the palace of the Sultan of Sokoto, the spiritual leader of Nigeria’s Muslims.

There are some genuine videos that show protesters burning tyres on streets, wielding machetes, knives and sticks while running across the streets and chanting Islamic prayers. Another video showed people looting and burning shops in a market. But there is no evidence of killing or butchering as claimed by Emeka Fans Page.

The state government has imposed a 24-hour curfew to regain peace in the state.

Two-year-old video shared
Another video was shared by many users, showing a woman in a torn white dress being beaten by men with sticks and what looks like a thick rope.

Other women wearing hijab can be seen standing and watching as the woman is being abused. She attempts to escape into a house but is pushed out by a group of men.

She is heard in Hausa stating: “I won’t do it again, forgive me.”

The BBC Disinformation unit found the video has been in circulation for at least two years on social media. At first glance, the circumstances surrounding the video are not clear but further investigation indicate the video was shot in Kaduna and the woman was arrested and charged for stealing and selling babies.

However, social media users are currently recirculating it and claiming it is from the recent violence in Sokoto. One user said: “They are killing Christians right now, if you have your relations in Sokoto…”

Non-existent doctor accused of killing Muslims
A screenshot of a Facebook post by a purported Christopher Uche-Ayodeji (Dr Chris) where he “confesses” to allowing many Muslims die while working as a doctor in northern Nigeria has also gone viral.

The screenshot says that “Dr Chris” is a physician at the University Hospitals Birmingham in the UK. He claims he enjoyed “every bit of it” as he was on a revenge mission.

The post said he was avenging the killing of a neighbour in northern Nigeria in 2015. Gimba Kakanda, a social critic with almost 200,000 followers on Twitter sent a tweet to University Hospitals Birmingham reporting Dr Chris.

The hospital replied that the individual was unknown to them. But users continued to share the screenshot on social media and went as far as falsely attaching a picture of an unrelated man, claiming it was Christopher Uche-Ayodeji. The picture turned out to be that of a Nigerian writer and journalist Ayodeji Rotinwa who tweeted and pleaded with people to stop using his picture.

On Facebook, the page belonging to Christopher Uche-Ayodeji (Dr Chris) does not exist, and neither does the message in circulation.

Another piece of disinformation being shared on social media is of the burning of the residence of the Catholic Bishop of Sokoto Diocese, Reverend Matthew Hassan Kuka during the riots.

A statement released by the Catholic Diocese of Sokoto said the news was false.

“We wish to disclaim that there was an attack of any sort on the residence of Bishop Matthew Hassan Kukah,” it said.

The statement also debunked claims that churches had been burnt down. It said protesters had destroyed the windows of the Holy Family Catholic Cathedral on Bello Way and that St Kevin’s Catholic Church was attacked and partly burnt.