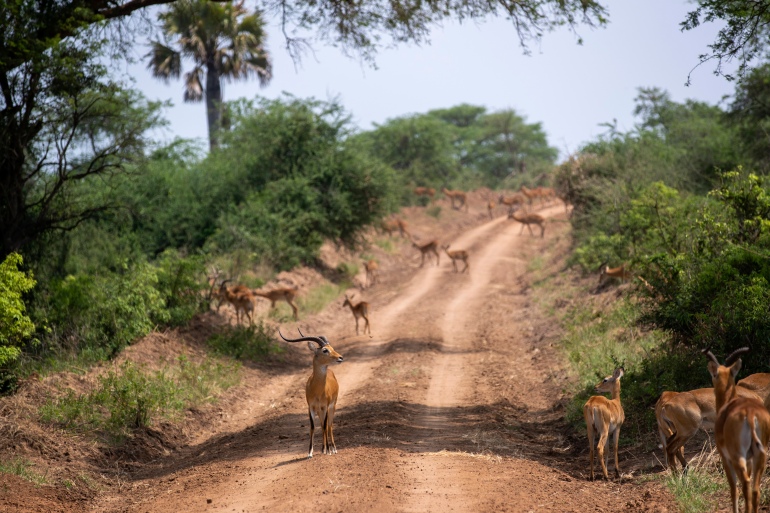 Uganda’s President Museveni has endorsed the controversial East African Crude Oil Pipeline project, warning that he won’t ‘allow anybody to play around’ with ‘my oil’.

Antelopes are seen in Murchison Falls National Park, northwest Uganda
Antelopes are  In September 2019, when Chemonges Amusa, the tourism warden for Murchison Falls Park, learned that oil drilling would soon commence within the borders of Uganda’s most visited national park, his eyes filled with tears.

The warden, now 42, who had spent most of his 15-year career in the depths of Bwindi Impenetrable Forest habituating gorillas, felt the drilling would affect the park and its animals.

He plunged himself into reading books and research papers, to try and learn as much about conservation in coexistence with development, and how the Uganda Wildlife Authority (UWA) might be able to stave off the worst harm.

“Like other rangers, I had the view that the animals would run away from the oil wells,” he said. “But the government had made a decision and we had to learn to manage it.”

In 2015, French oil giant TotalEnergies and the China National Offshore Oil Corporation (CNOOC) signed a memorandum of understanding (MOU) with the governments of Uganda and Tanzania, to drill for oil in Uganda and export it via a 1,443km-long pipeline through Tanzania’s coast.

While the project has received much criticism from environmental and conservation groups, Uganda’s long-serving president, Yoweri Museveni has endorsed it, warning that he will not “allow anybody to play around” with “my oil”.

The three-part $10bn plan comprises the controversial East African Crude Oil Pipeline, the Kingfisher Lake Albert project and the Murchison Falls project, known as Tilenga. Inside Murchison, 10 well pads and a feeder pipeline are being built, as well as a refinery on the park’s border.

If it goes ahead, it will be the first oil project within a protected area in East Africa.

Albertine Rift, which encompasses the park and Lake Albert – the second biggest of Uganda’s Great Lakes – is one of the most species-rich areas in the world, housing more than half of Africa’s birds, 40 percent of Africa’s mammals and about 20 percent of its amphibians and plants. It also is home to more threatened and endemic species than any other region on the continent.

Environmental opposition
Environmentalists have warned about the potentially devastating effect on numerous species, including the eastern chimpanzee, listed as endangered by the International Union for Conservation of Nature.

Prominent conservationists like Uganda’s Vanessa Nakate and Bill McKibben have spoken out against the oil projects, and supported a campaign called #StopEACOP to dissuade insurers and banks from financing the project.

“The current estimate is that the Tilenga, Kingfisher and EACOP project will contribute to 1.3 million metric tonnes of carbon per year. That has a huge impact on efforts to fight climate change,” said Dickens Kamugisha, chief executive of Africa Institute for Energy Governance (AFIEGO), an IUCN member, and part of the #STOPEACOP campaign.

So far, 20 banks have declined to finance the project, including Barclays Bank and HSBC.

Under the radar
In 2010, another company, Soco Oil began exploration activities in nearby Virunga National Park in the Democratic Republic of the Congo – home to some 200 of the last remaining 700 wild mountain gorillas on Earth. But, following a global backlash and exposure in a Netflix documentary, the company pulled out of the project.

Although oil was discovered in Murchison and Virunga parks at around the same time, the latter received more international attention given its UNESCO World Heritage status and iconic gorilla species, said a former IUCN staff member who worked in both parks.

“So, while the world’s attention was on Virunga, the project in Murchison was able to quietly progress without much opposition,” the person, who asked to remain anonymous, said.

The silence from the international community could be because Uganda’s wildlife law allows for oil exploration in protected areas, provided the effect on the environment is “minimised and the natural habitat is restored”.

But sources say there could be another reason.

Unlike Soco, TotalEnergies made a strong commitment to engage conservation groups early on in their activities. According to the former IUCN staffer, the organisation is working with the oil company to develop its energy diversification policy, despite letters of opposition from its African member states.

In a statement to Al Jazeera, IUCN said it was “deeply concerned” by the project and its impact on conservation and climate action in Uganda. It said it had not entered into a partnership with TotalEnergies but its council was reviewing a proposed engagement on how to “implement and substantially enhance” Total’s commitments to reduce the effects on biodiversity.

“As part of that process, IUCN Members in five countries where TotalEnergies has a significant presence have been consulted,” it added.

Similarly, TotalEnergies commissioned the Wildlife Conservation Society to conduct a study on the effects on animal movement during oil exploration in Murchison. It discovered that seismic activities and drilling of oil wells on pads had a significant negative impact on large mammals, with many species moving up to a kilometre away from the site when drilling was happening.

“WCS did later realise that the engagement with the petrol company was not the best idea and the impact was much larger than they had expected,” the former IUCN staffer said.

A WCS spokesperson said its role is to ensure environmental protection and conserve biodiversity. “That is why we are doing the science to ensure the company [TotalEnergies] does not harm nature,” they told Al Jazeera.

The Ugandan government did not respond to a request for comment.

Controversial studies
Nina Pius Mbuya, dean of the faculty of agriculture at Uganda Martyrs University, said the WCS study failed to show added human-wildlife conflict. In a different study, Mbuya’s students at the International University of East Africa, found that a forced change in elephant range caused more elephants to raid crops, leading to deaths on both sides.

Despite communities voicing these concerns in town hall meetings where TotalEnergies executives were present, no action was taken, added AFIEGO’s Kamugisha.

TotalEnergies did not respond to a request for comment.

Furthermore, said Kamugisha, the project’s environmental and social impact assessment (ESIA) funded by TotalEnergies as allowed by Ugandan law, was comparable to a “defendant presiding over his own case”.

“The findings will be as they wish them to be, which in this case state residual impacts will be low or insignificant,” he added.

Moses Dhaba Sadha, UWA’s warden for enforcing ESIA compliance, said the authority had provided feedback on minimising effects in the park. For example, in a known breeding area for Ugandan kobs, a 100-metre buffer zone was created. Or, in a depression where buffalos bathe, a 30-metre buffer zone.

“We tried to find a compromise in that if oil activities were to be done, they should be done with care for the ecosystem,” added Sadha.

In July, the East African Crude Oil Pipeline company applied for a licence to kick-start the development of the pipeline, with oil drilling set to begin early next year, according to local media reports. Production of 230,000 barrels per day is scheduled for 2025.

Sadha said UWA has already received delegations from the DRC and Ghana who are keen to see how the authority is managing conservation with oil development, as they are interested in doing the same.

“This is the most concerning part of this catastrophic project”, said the former IUCN staffer. “When you allow oil drilling in one protected area, it opens the door for many other devastating projects.”

In the interim, citizens like Chemonges seem to have been co-opted into the official message: that oil is necessary for Uganda’s economic development and mitigation measures will ensure drilling does not affect conservation.

“My perception at first was that oil exploration and drilling would cause serious migrations or death to animals but that was a myth,” the ranger said. When asked whether oil development should extend to other national parks across Africa, Chemonges remained silent.