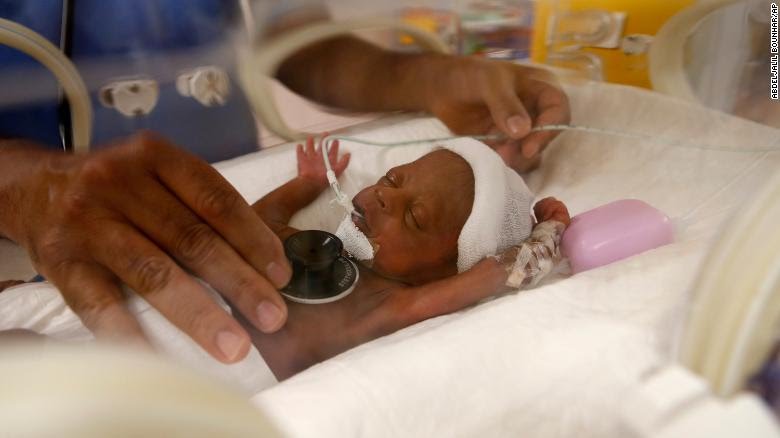 The world-famous nonuplets born to a couple from Mali, West Africa have celebrated their first birthday with a small party at home.
Halima Cissé and Abdelkader Arby welcomed five girls and four boys, weighing between just 1.1 and 2.4 pounds, at the Ain Borja clinic in Casablanca, Morocco on May 4 last year.
Twelve months on, and the nine miracle babies are thriving and reaching developmental milestones, their father, Arby, shared.
“They’re all crawling now. Some are sitting up and can even walk if they hold on to something,” he told the BBC.
Discussing his experience of raising the babies as well as their three-year-old daughter Souda, Arby said that while it’s “not easy,” it was great to see “all the babies in perfect health, (in a line) from right to left, we’re relieved. We forget everything.”
The couple marked the siblings’ first birthday with a gathering attended by their neighbors and nurses from the clinic.

A nurse takes care of one of the newborn nonuplets, lying in an incubator, at the Ain Borja in Casablanca on May 5, 2021.
The nonuplets made history as the most babies delivered in a single birth to survive when they were born prematurely via Caesarean section, 30 weeks into Cissé’s pregnancy.
The previous Guinness World Record for the most children delivered at a single birth to survive was held by the eight babies born in 2009 to California-based Nadya Suleman, popularly known as “Octomom.”
Ahead of the birth, Cissé and Arby were flown to Morocco by the Malian government so Cissé could receive specialized medical care. It took a team of more than 30 doctors and paramedics to deliver the babies safely, the clinic said in a statement at the time.
Arby told the BBC that the toddlers are still under the care of the clinic where they were born and live in a “medicalized flat” in Casablanca that belongs to the clinic’s owners.
According to the World Health Organization, around 15 million babies are born prematurely every year, with the majority being in Africa and South Asia.