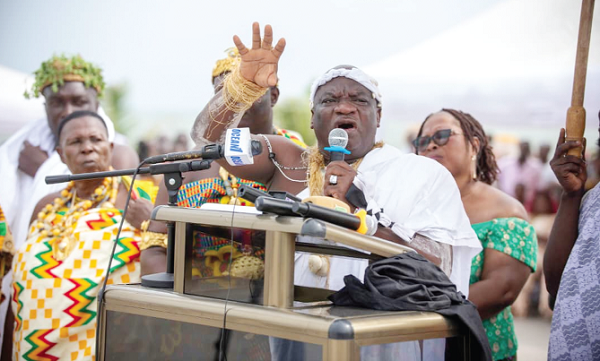 The chiefs and people of Edina, near Cape Coast in the Central Region, have used this year’s Bakatue festival to drum home the need for Ghanaians to patronise and also use goods produced in the country.
On the theme: “Buy Made in Ghana Goods, Use Made in Ghana Products and Support Ghanaian Industries and Create Employment for the Youth,” the chiefs took turns to appeal to the public to patronise items, services and products made in the country.

The Omanhen of Edina Traditional Area, Nana Kodwo Conduah VI, appealed to the government to resolve all issues that led to the collapse of the Groupe Nduom Companies, especially the bank, and reinstate them.

He said doing so would help address the unemployment rate in the area, saying the rate of youth unemployment was frustrating and distressing, hence reviving the collapsed bank would help resolve the situation for the betterment of all.

“I will urge the government to reinstate the GN Bank’s licence so that it can resume operations because the impact of its collapse on people’s living conditions has been more severe than anticipated,” he stated.


Nana Conduah made the call when he addressed his people during a grand durbar to climax the celebration of this year’s Edina Bakatue Festival in Elmina last Saturday.

A large crowd of patrons lined the streets of the municipality to cheer the Paramount Chief on, as he rode in a palanquin through the streets to the durbar grounds, occasionally standing up to dance to traditional drumbeats, usual for such traditional gatherings, which threw the crowds into a frenzy.

This year’s festival attracted a large patronage as it marked the return of the open-air celebration since the lifting of the ban on gatherings due to COVID-19 restrictive protocols and regulations.

A prossesion of chiefs and people of Edina through the streets of Elmina. Behind is the historic Elmina Castle

The famed Tekua Women, who performed while dressed in colourful traditional garb, added colour and excitement to the celebration with their colourful cultural performance.


Traditional authorities had limited the Bakatue to only the rites for the 2020 and 2021 celebrations.

Nana Conduah noted that celebrating festivals, apart from their cultural aspect, was also a business venture and needed more resources to make it beautiful, attractive and unique to portray the rich culture and history of the people to court investors into the country.

The Edinamanhen tasked all citizens to contribute towards preparations of festivals to help improve the area.

Nana Conduah also called on the Museums and Monuments Board to pay part of the revenues accruing from the Elmina Castle as royalties to the Traditional Council.

“We were receiving our share of the castle funds during President Kufuor’s time until 2009 to date and we will take necessary actions when the monies are not paid within a month,” he stressed.

Nana Conduah asserted that even while Elmina had played a critical role in the tourism industry and had many tourist attractions, it received very little support and attention.

He, therefore, appealed to the Ghana Tourism Authority (GTA) to give special attention to the area and ensure that tourist attractions there were developed with the requisite capacity and logistics to continue to attract more tourists and investors.

“Elmina is very much included in Ghana’s tourism history because it hosts many of the country’s tourist attractions and so serves as a vital economic engine for the region. Nevertheless, it does not receive the necessary attention. I think we could attract more investors if we put a lot more emphasis on that,” Nana Conduah stressed.

On flooding in some communities in the area, the Omanhen called on the works and housing department of the Komenda, Edina, Eguafo, Abrem (KEEA) Municipal Assembly to demolish all structures which had no permit to make way for rainwater to reduce the rate of flooding during rainy seasons.

He asked his sub-chiefs to relocate all citizens affected by the rains by giving them land free of charge to settle to avoid further incidents in the area.

The Edinamanhen also applauded the President for speedily working on the area’s fishing harbour, and expressed the hope that the project would be completed soon.

Nana Conduah expressed gratitude to the government, especially the Minister of Roads and Highways, Kwasi Amoako-Attah, and the Minister of Transport, Kweku Asiamah, for their timely interventions and efforts towards developing Elmina during this rainy season.

The Edinamanhen, however, called on the government to fulfil its promise of providing a new school bus for the Edinaman Senior High School, which is the only secondary school in the area.

Nana Conduah also appealed to the relevant ministers responsible for helping the government to reduce the rate of strikes in the country and urged the citizenry to support the government by paying their taxes to help develop the nation.

The Municipal Chief Executive of KEEA, Solomon Ebo Appiah, assured the traditional council of the government’s support and pledged to intensify efforts to complete projects that had already started in the municipality.

He added that the Elmina Polyclinic would soon have a surgical theatre to satisfy any urgent medical needs.

The Chairperson for the occasion, Osagyefo Kwame Akonu, urged local artisans to improve on their finishing and branding so that they would become globally competitive.

He emphasised that to market made in Ghana products, the producers needed to take into account rebranding and repackaging of goods to satisfy international standards and command higher prices.