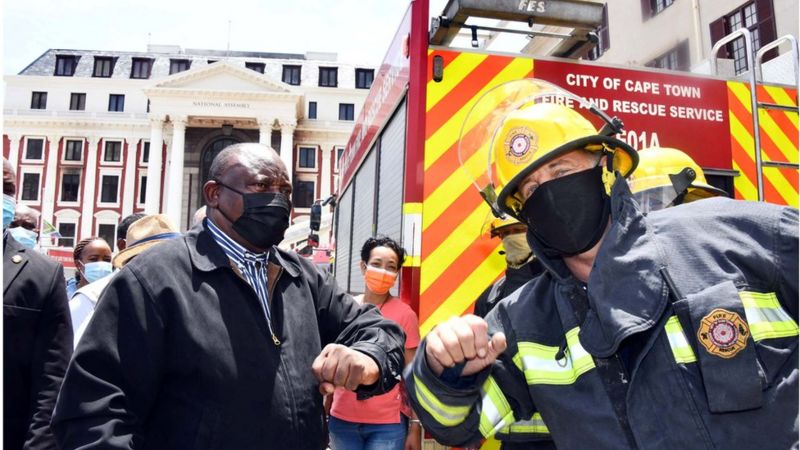 A man has been arrested after a large fire severely damaged the Houses of Parliament in the South African city of Cape Town.

A police spokesperson said the 49-year-old man was facing charges of arson, housebreaking and theft, and would appear in court on Tuesday.

Firefighters have been working for hours to extinguish the blaze.

President Cyril Ramaphosa called it a “terrible and devastating event”, as he vowed parliament’s work would continue.


Footage from the scene showed a plume of black smoke filling the sky, with huge flames coming out from the roof of the building.

Officials said the fire started on the third floor offices and quickly spread to the National Assembly (the parliament’s lower house) chamber, reports the BBC’s Nomsa Maseko in Cape Town.


No injuries have been reported.

Brigadier Nomthandazo Mbambo said the suspect is also expected to be charged under the National Key Points Act, which protects sites of strategic importance.

Further details were not immediately available.

Mr Ramaphosa, who visited the scene on Sunday, said news of the fire was a “terrible setback to what we were basking in yesterday” and added that Archbishop Tutu would also have been devastated.

He said the building’s sprinkler system had not functioned properly, and praised firefighters for responding to the fire in minutes.

Jean-Pierre Smith, a member of the Cape Town mayoral committee for safety and security, told reporters that the roof above the old assembly hall was “completely gone” and further damage inside the old chamber had not yet been evaluated.

“It is not possible to see whether it’s damaged. We hope it is not because it has so many historical artefacts, but you can’t gain access to it without breaking the doors down and we don’t want to do that,” he said.

He also said that parliament’s fire alarm only rang when firefighters were already on site.

South African President Cyril Ramaphosa bumps elbows with a firefighter as he inspects damages after a fire broke out at the Parliament building in Cape Town, South Africa, January 2, 2022
IMAGE SOURCE,REUTERS
Image caption,
President Ramaphosa (left) visited parliament to inspect the damage
Aftermath of Cape Town parliament fire
IMAGE SOURCE,CITY OF CAPE TOWN
Image caption,
City officials released photos of the effort to put out the fire
Fire and rescue service officials earlier said they expected it to take several more hours to put the fire out completely because of the carpets and wooden floors in the building.

The damage from the fire can be seen in this image made available by the city of Cape Town:

The parliament is not currently in session because of the holidays.

The Houses of Parliament in Cape Town are made up of three sections, with the oldest dating back to 1884. The newer sections built in the 1920s and 1980s house the National Assembly. Meanwhile, the government is based in Pretoria.

In a statement on Sunday, Mr Ramaphosa spoke of his sadness at “this destruction of the home of our democracy”.

It was the second fire at the parliament in under a year. In March there was a fire caused by an electrical fault.