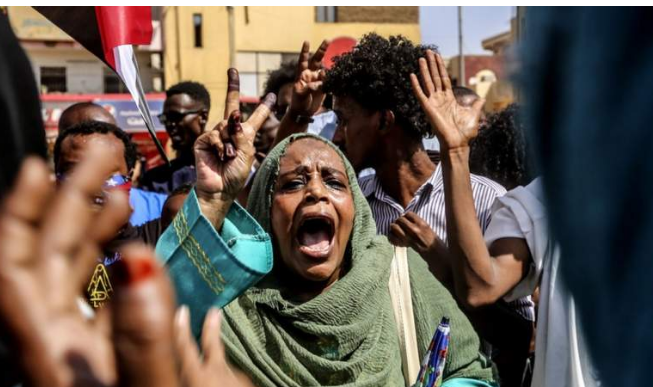 Thousands marched in the capital Khartoum and other cities on Saturday, demanding the reinstatement of ousted Prime Minister Abdullah Hamdok.

The interior ministry denied that live rounds had been fired. Activists say around 100 people were injured.

The general, who also called a state of emergency, said his actions were justified to avoid “civil war” and stop political infighting. The military takeover has drawn widespread international condemnation.

Demonstrators in Khartoum were seen marching with Sudanese flags and chanting, “No to military rule!”

“People here are very peaceful. These protests are going to continue being peaceful even when faced with the guns,” Shaheen al Shaheef, a member of the Khartoum Resistance Committee, told the BBC.

“However, we do realise the current situation of [Gen] Burhan – he has lost all his backing. This is really a one-person coup, there is nothing, no-one else to back him.”

Sudan’s Central Doctors Committee, an independent body, said three protesters had died after being shot by live bullets in Omdurman.

But the interior ministry denied the use of live rounds and accused some protesters of attacking the police.

EXPLAINER: A simple guide to coup
ANALYSIS: Sounding the alarm for Sudan’s democracy
CONTEXT: Are military takeovers on the rise in Africa?
More than 10 protesters have died in clashes with security forces this week.

The Sudanese authorities have cut off the internet and other communications, as well as imposing restrictions on movement.

Until Monday’s coup, civilian and military leaders had been in an uneasy power-sharing agreement since long-time ruler Omar al-Bashir was overthrown in 2019.

The deal was designed to steer Sudan towards democracy, but it proved to be fragile with a number of previous coup attempts, the last just over a month ago.

Gen Burhan, who was head of the power-sharing council, said Sudan was still committed to the transition to civilian rule, with elections planned for July 2023.