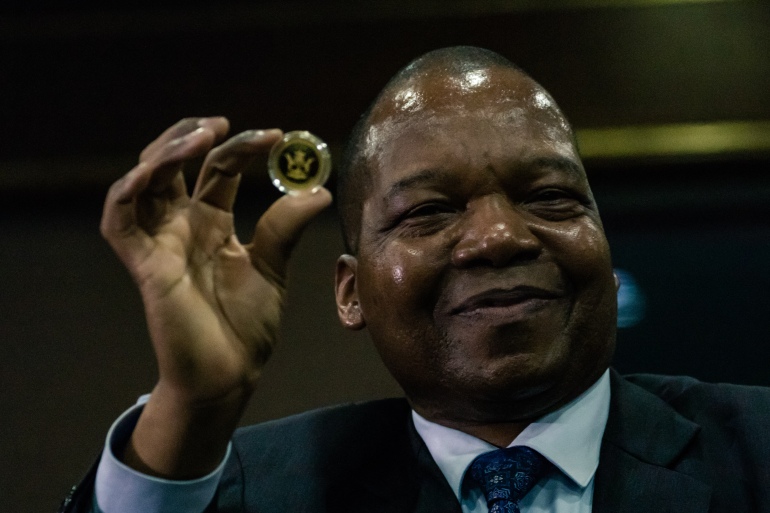 Zimbabwe has launched gold coins to be sold to the public, in a bid to curb an inflation spike that has eroded the country’s unstable currency.

The move was announced on Monday by the country’s central bank, the Reserve Bank of Zimbabwe, which disbursed 2,000 coins to commercial banks.


Called Mosi-oa-Tunya, which in the local Tonga language refers to Victoria Falls, the coins “will have liquid asset status”, meaning they “will be capable of being easily converted to cash and will be tradable locally and internationally”, the central bank said in its announcement, adding the coins “may also be used for transactional purposes”.

Holders will only be able to trade them for cash after 180 days from the date of buying.

Individuals or companies will be able to buy them from authorised outlets such as banks and keep them at a bank or take them home, according to the announcement. Foreigners can only buy the coins in foreign currency.

The first batch was minted outside the country but eventually they will be produced locally, said John Mangudya, the governor of the Reserve Bank of Zimbabwe.


He added the 22-carat coins can be used for purchases in shops, depending on whether the shop has enough change, as well as security for loans and credit facilities.

Their price will be determined by the international market rate for an ounce of gold, plus five percent for the cost of producing the coin. At the time of the launch on Monday, the cost of one Mosi oa Tunya was $1,824.


Trust in Zimbabwe’s currency is low after people saw their savings wiped out by hyperinflation in 2008. In June, inflation jumped to 191.6 percent, from 132 percent in May.

Authorities are struggling to pull Zimbabwe from the grips of an economic crisis characterised by a rapidly devaluing local currency, 90 percent unemployment and declining manufacturing output.


Harare-based independent economist Victor Bhoroma told Al Jazeera that “gold coins are a good idea in terms of storing value … but they will likely be indexed in US dollar which means it’s a fundraising scheme to get US dollars from the market by the central bank. The success will thus depend on confidence in the central bank as the seller of the coins and guarantees that back them.”

Internationally, gold coins are used in countries such as China, South Africa and Australia to hedge against inflation and as an investment opportunity, although they are not as widely used as currency as envisaged by Zimbabwe’s central bank.

Harare has substantial gold deposits and exports of the precious metal are one of the southern African country’s major foreign currency earners.

However, gold smuggling has been rampant. Smuggling is costing the country about 33 tonnes of gold annually, according to a report issued last month by the Centre for Natural Resource Governance.

All gold mined in Zimbabwe is supposed to be sold to the central bank, but many producers prefer to smuggle it out of the country in order to get payment in US dollars.