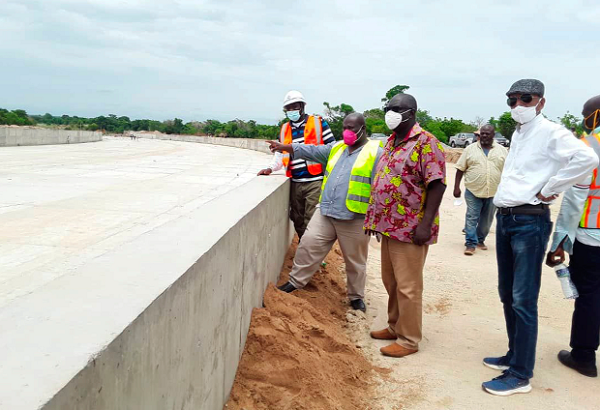 In all, 1.67 million ha, representing 88 per cent of the country’s irrigable land, remains to be developed.

This leaves a significant portion of the country’s agricultural production being rain-fed, with a negligible portion attributable to the emerging greenhouse production.

This has raised concerns among stakeholders who have called for increased investment to develop more irrigation infrastructure of the country.

The lack of investment for new irrigation infrastructure and maintenance of existing schemes are the bane of the irrigation-dependent agriculture in the country.

The Ghana National Association of Poultry Farmers (GNAPF) and the Peasant Farmers Association of Ghana (PFAG) have stressed the importance of increased application of irrigation interventions to improve productivity and lift many people out of poverty.

They bemoaned the large tracts of arable land that had been allowed to fallow, stressing that the government must invest heavily in agriculture so that the country could increase food production at a lower cost.

However, the government has initiated steps for the construction of six small irrigation dams to provide an all-year-round irrigation water for farming.


The Ghana Irrigation Development Authority (GIDA), an agency under the Ministry of Food and Agriculture (MoFA), started the processes towards the construction of the dams last year.

The projects are the Duadinyediga in the Tempane District in the Upper East Region, Kpalbutabu in the Tatale-Sanguli District in the Northern Region, with four others located in other areas within the region.

They are considered as lots-development of irrigable areas and construction of dams.

Additionally, there are two big irrigation projects ongoing. They are the Tamne phase III near Garu in the Upper East Region and the irrigation component of the Pwalugu Multipurpose Dam which lies entirely in the North East Region.

Furthermore, 14 community irrigation schemes, which were awarded by the Ministry of Food and Agriculture (MoFA) between 2019 and last year for the construction of three schemes in the Northern, four in Upper East and seven in the Upper West Region, have been completed.

The Chief Executive Officer (CEO) of GIDA, Wilson K. Darkwah, made this known in an interview with the Daily Graphic in Accra.

The budget also projects that MoFA will commence and complete the Tamne Phase III which will make 800ha available for the development and production of horticultural crops for export.

It is estimated that 15,000 farmers will benefit from the facility.

The move is also to ensure food security and respond to climate change, which has negatively affected the volume and pattern of rainfall across the world, especially in sahalean regions.

The increased use of irrigation, which is mostly used for the production of staple crops such as rice, maize, other cereal and vegetables, can help the country to reduce its food import bill significantly and improve farmer income.

The Minister of Trade and Industry, Alan Kyeremanten, told Parliament in December last year that the country spent an estimated GH₵6.874 billion to import rice between 2017 and 2020.

According to agriculturists and irrigation professionals, the country has a huge untapped potential for irrigation development that can be utilised to increase agricultural productivity and subsequently food security in the country.

The GIDA said cropping under irrigation is done twice a year but under very efficient conditions it could be done three times for short duration crops.

The developed land for irrigation have been categorised into informal and smallholder farms; large scale and commercial; formal and public irrigation schemes.

The informal and commercial sectors cover the largest share of the total land under irrigation (226,908.85 ha).

While the informal sector covers 189,000 ha, the commercial irrigated lands constitute 21,000 ha. The informal and commercial sectors include small-scale farmers such as all vegetable growers in cities and communities.

There are 189 formal and public irrigation schemes dotted around the country which constitute 16,908.85 ha of irrigated fields.

The figures indicate that about 93 per cent of the total lands currently under irrigation are being managed by the informal and commercial sectors.

Projections by the Ghana Commercial Agricultural Project (GCAP), the rehabilitation of just two irrigation schemes — the Tono and Vea dams, will save the country huge resources being spent on importing rice and also improve farmers’ incomes.

According to the projections by the agricultural experts, it is expected that yields of paddy rice at the Tono Irrigation Scheme in the Kassena Nankana Municipality in the Upper East Region, for example, will increase from 4.5 tonnes to six tonnes per hectare (up by about 33 per cent).

This will eventually translate into an annual production of 19,359 tonnes of paddy rice and will help reduce rice importation.

The annual production of paddy rice is expected to, in turn, generate a gross revenue of GH¢32 million (at an average rate of GH¢1.65 per kilogramme).

At an expected farm budget of GH¢5,773 per hectare per season, the net income for the farmers per hectare has been projected to be GH¢4,127 per season or GH¢8,254 per annum at two cropping cycles per year.

The scheme, GCAP experts said, was also expected to improve the creation of more direct and indirect jobs, improve standard of living and the rural economy. It will also facilitate better adaptation to climate change.

Specific benefits of the scheme include intensification in the cultivation of paddy rice, tomatoes and soya beans.

Equally significant is the fact that when work on the Vea irrigation scheme in the Bongo District of the Upper East Region is completed, it will put 850 hectares of land under rice cultivation, comprising 350 hectares of lowland rice and 500 hectares of upland rice production.

With support from MoFA, the irrigable land for rice production at Vea is likely to double to 1,700 hectares when its rehabilitation is completed and it is envisaged that the increase in hectares will drastically reduce the importation of rice.

While commending the government for initiating the $1 billion Pwalugu Multipurpose Dam which will bring on board 24,000 ha of irrigated land, the biggest when completed, Mr Darkwah said the bane to the development of irrigation infrastructure was inadequate funding and the lack of maintenance.

Mr Darkwah said apart from managing the public irrigation schemes, GIDA also provided technical support to private individuals, companies and small holder farmers, who were operating some of the irrigation schemes in the country.

He said GIDA was set up in 1977 to formulate policies for the development of irrigation in the country.

However, the authority did not have the full complement of professional staff to be able to man all the three zonal and regional offices for effective supervision of irrigation schemes across the country.

“We work with engineers, sociologists, agronomists, soil scientists and others, while some are retiring and exiting the organisation we need to get financial clearance to recruit more because we are doing so many projects now than before,” Mr Darkwah said.

He gave the current staff strength as 170 out of which 90 are in the head office where many activities were initiated from.

Mr Darkwah further revealed that the existing schemes that were functional were mainly the gravitational ones but explained further that some of the schemes which were being powered by electricity were predominantly the ones that were not functional.

He said the irrigation facility at Yapei in the Savannah Region was not functional, because a transformer accessory had been vandalised, resulting in power supply cut to the irrigation system.

The Chairman of the Ghana National Association of Poultry Farmers (GNAPF), Victor Oppong Adjei, and the Upper East Regional Focal Person of PFAG, Reverend John Akaribo, in separate interviews, shared their thoughts on what can be done to exploit the huge potential of irrigation in the country.

That is against the backdrop of GIDA statistics that showed that the country had not been able to put a significant portion of its irrigable land to productive use.
They called on the government and its partners to urgently prioritise rehabilitation of existing irrigation infrastructure to fully unlock the country’s huge irrigation potential.

They were of the conviction that such a measure would enable the country to increase food production, stop the importation of rice and shore up the country’s foreign exchange earnings.

Equally important, they further observed, was the need for the country to adequately prepare for the future by putting all the irrigable lands to use because of climate change issues and erratic rainfall pattern being experienced lately.

Rev. Akaribo lamented the lack of political will and commitment towards developing irrigation infrastructure and the entire agricultural sector in the country.

The PFAG Focal Person further called on the government and development partners to help take inventory of all existing irrigation schemes in the country with the aim of systematically rehabilitating them to promote dry season farming, particularly in the five regions of the north.

That, he noted, would ultimately improve on food security and nutrition among children and the entire population, curb the rural-urban migration and importation of rice and other food stuff.

“Let us concentrate on the existing irrigation schemes, let’s go back to them and put the necessary facilities in place to help revamp them; we can’t just abandon all these existing schemes. We need to take inventory of all these schemes,” Rev. Akaribo pleaded.

He noted that women, most of whom were the bread winners, particularly in the north, would be able to feed themselves and their respective families, thereby reduce poverty significantly.

Rev. Akaribo said he was saddened by the plight of farmers when recently he visited Zebilla in the Bawku West District in the Upper East Region, where a good number of women, who were into onion cultivation, were seen digging the “hard ground just to prepare the land to plant”.

He explained that the only dam to serve the women had “dried up completely,” saying since 2006 when the dam was constructed, there had been no deliberate effort to desilt it.

“You see when it comes to drawing up plans on paper, we are very good but we are bad managers and implementers of ideas and policies,” Rev. Akaribo lamented.

For the chairman of the poultry farmers, there was a positive link between the poultry industry and putting irrigable land to good use, particularly in the area of increasing maize production.

Mr Adjei said if more parcels of irrigable land were utilised, it would help to increase maize yield, which was an important input for the production of animal feed.

That would help the poultry and brewery industries to survive and also ensure food security since maize was an essential staple crop.

That measure would also enhance the country’s socio-economic development, he posited.

Mr Adjei recalled a research conducted by the African Development Bank (AfDB) which indicated that 65 per cent of the world’s arable land were found in Africa, with the rest of the continents sharing only 35 per cent.

He, however, expressed regret that the developed countries, with their limited arable land, were able to feed themselves and export to some African countries.

The chairman of the poultry farmers further expressed concern that in Ghana “agriculture seemed to be neglected” and cited Morocco, for instance, which had been devoting about 50 per cent of their budget to the development of agriculture.