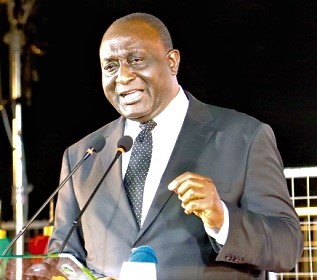 The African Continental Free Trade Area (AfCFTA) Secretariat has launched its Guided Trade initiative at the Kotoka International Airport (KIA) in Accra, with about 96 products marked for trading by seven member countries.
The seven countries which have signaled their readiness to commence commercially meaningful trade under AfCFTA are Ghana, Tanzania, Mauritania, Kenya, Egypt, Cameroun and Rwanda.


All products originating from Africa will enjoy duty-free and quota-free trading among the partnering countries.

Launched on the margins of the 10th Meeting of the AfCFTA Council of Ministers last Friday, the guided trade initiative seeks to facilitate trade through an arrangement of businesses and products for export and import among interested state parties.

The ceremony in Accra marked the beginning of commercially meaningful trade on a pilot basis among the seven nations.

In an address, the Secretary-General of the AfCFTA , Wamkele Mene, said the take-off of the guided trade meant the sacrifices made by the founders of the continent had not been in vain

“This is the moment the founding mothers and fathers of the Organisation of African Unity have longed for. We have finally honoured and made reality the vision of those who liberated our continent.

“We are connecting East Africa to West Africa, North Africa to Southern Africa. Trade will be the driver of inclusivity, creating opportunities for young Africans. So we have taken the first journey today and I hope in 15 years we would have succeeded in lifting millions and millions of Africans out of poverty,” he said.

He said the expectation was that by next year, there would be a major increase in the number of countries participating, as well as products for trading.

While thanking the countries that had so far expressed their readiness to start trading under the AfCFTA, he said more countries had expressed interest as they concluded the process of domesticating the AfCFTA in their laws.

Kenya exported exide batteries worth $77,000 to Ghana on September 23, while on October 5, it made its second export of tea products to Ghana.


In Kenya, President William Ruto told me that all the tea consignment that was being exported to Ghana had been produced by small-scale farmers and so there is a significant opportunity for small-scale producers,” Mr Mene said.

He said the integration of Africa had the potential to stop the needless death of Africans in boats on the Mediterranean and also reduce poverty on the continent.

He lauded the role of small stakeholder farmers in the take-off of the guided trade.


The launch was marked with the exhibition of African products at the KIA.

The Minister of Trade and Industry, Alan Kyerematen, said the launch of the guided trade was an indication that AfCFTA was a reality.

Mr Kyerematen said the AfCFTA agreement was “Africa’s economic development” and not just a legal document.