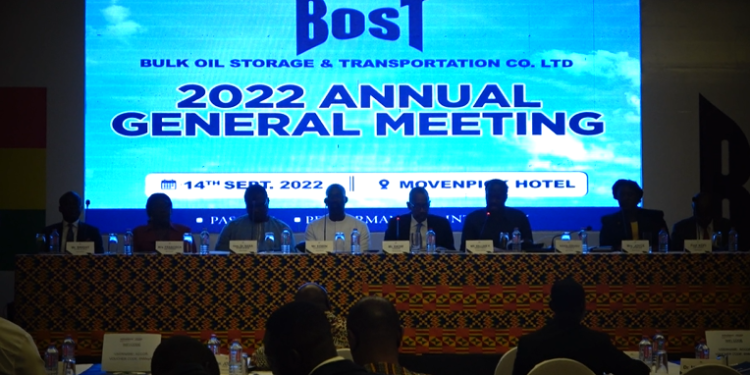 The Bulk Oil Storage and Transportation (BOST) Limited Company has held its maiden Annual General Meeting since its establishment in 1993.

The event, which took place at the Movenpick Ambassador Hotel in Accra on Wednesday, September 14, 2022, had many dignitaries gracing it with their presence.

The AGM also comes as a great achievement to the company, as it signifies a significant turnaround after over 11 years of recording losses.

The Energy Minister, Dr. Matthew Opoku Prempeh, who in his capacity as the sector minister is the authorized representative of the shareholder of BOST, applauded the company’s achievements over the years.


“I have had the opportunity to take a look at the state of the company in January 2017 from a copious report I received and was surprised at the financial and operational out-turns of the company for the year 2021 which report I believe shall be a cardinal part of this Annual General Meeting.”

He continued, “From a debt position of US$624 million owed suppliers and related parties, BOST has over the five years preceding the year in focus, 2021, paid US$611 million with IGF contributing about US$423 million. The BOST portion translates into an average of US$84.6 million of company generated cash per year being spent on debts accrued through the trading activities of the company in the past.”

He further congratulated the Board of Directors and management of the company for the financial performance in the year ended 2021.


“I am confident more can be achieved if the same momentum is sustained. A profit before tax of GH¢164 million from a previous year of GH¢2 million,” he added.

The Minister for Public Enterprises, Joseph Cudjoe, tasked the Board of Directors of BOST to work harder towards making the company a dividend-paying enterprise following this first AGM.

“BOST in 2021 made a turnaround from a heavy loss position of GH¢458.64 million in 2016 through a minimal loss of GH¢291.02 million in 2020 to a profit position of over GH¢160 million in 2021. I have learnt that this feat is the first in 11 years and I seize this opportunity to commend the current Board and Management for striving to attain this success. It is my fervent hope that Management will continue to tread this path to the extent of paying dividends to government, in accordance with the vision of the President.”


Director-General of the State Interests and Governance Authority (SIGA), Ambassador Edward Boateng, expressed hope that BOST will achieve more in the coming years through “innovative thinking, perseverance, and teamwork from all stakeholders”.

Revenue from our marine transportation business increased by 412% from the previous year’s revenue of GH¢2.9 million to GH¢14.9 million. This was mainly due to the full deployment of all four barges of the company after they had undergone extensive renovation. Storage and rack revenue also saw a steady growth of 4% from GH¢50.4 million to GH¢52.6 million.