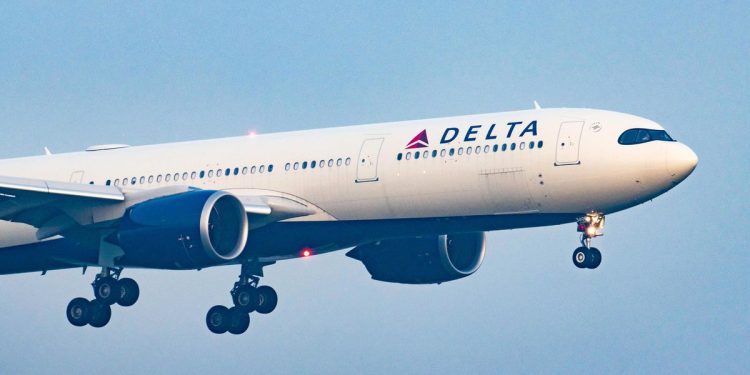 The Ghana Civil Aviation Authority has banned an aircraft with Delta Air Lines, with registration N195DN, from flying to Ghana.

According to the Authority, the decision follows the failure of the company to investigate and address technical issues regarding the aircraft in question, which left several Accra-bound passengers, including Ghanaians, stranded at the JFK airport on July 24, 2022.

The crew of the Airline raised an alert about fuel imbalance with the left main tank of the aircraft.

The Civil Aviation Authority said the aircraft was, however, dispatched within the United States despite the alert raised.


“With immediate effect, Delta Air Lines is being advised not to dispatch the B767-332 with registration number N195DN for flights to Accra”, Ghana Civil Aviation Authority ordered in a statement.

Recently, seven travellers, including an American and the Communications Officer of the National Democratic Congress, Sammy Gyamfi, petitioned the Aviation Consumer Protection Office of the US Department of Transportation over the conduct of Delta Air Lines Incorporated.

They complained that their flight from the US on July 24 was inexplicably delayed.

The flight was then rescheduled, cancelled and rescheduled without sleep arrangements for passengers.


The complainants contend that this inconvenience was on the “flimsy ground that one of its pilots had not reported for work.”

In a statement sighted by Citi News, the Ghana Civil Aviation Authority called on the authorities of the aircraft to deal with the technical challenge.

Below is the full statement:

Following the events of 13th August 2022, when your aircraft with registration N195DN was forced to return to gate due to a technical problem. a team of Ghana Civil Aviation Authority (GCAA) inspectors were tasked to conduct an investigation or the circumstances surrounding this occurrence.
The investigation revealed that:
1. The crew reported a fuel imbalance issue with the left main tank.
2. The inbound crew experienced this same issue on the flight leg to Accra i.e.. on 31st July 2022.
3 This was the same aircraft that had to return to JKF on 25th July 2022 a few hours after take-off from JFK and which was widely reported on in various media outlets.


It was expected that after such a negative reportage. Delta Air Lines would have thoroughly investigated the issue to arrive at the root cause of the failure before dispatching the aircraft on flights. Rather, the aircraft was flown within the United States a number of times and then dispatched again to Accra, only for the problem to reoccur.

The Authority finds this unacceptable. Therefore, with immediate effect, Delta Air Lines is being advised not to dispatch the B767-332 with registration number N195DN for flights to Accra. As your aging 0767 fleet are of much concern to Ghanaian travelers, Delta Air Lines must put in place a plan to change the type of aircraft on the JFK-ACC-JFK route as soon as practicable. Kindly communicate this date to the undersigned in your response.