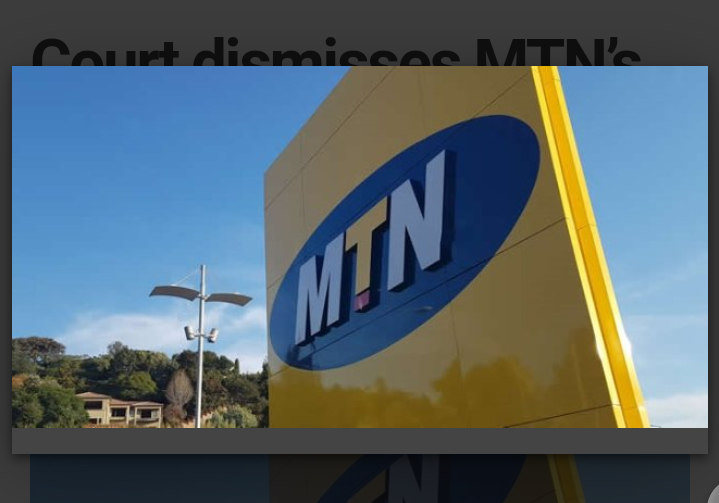 The Commercial Division of the High Court in Accra on Tuesday, September 1, 2020, dismissed a suit filed by Mobile Telecommunication giant, MTN, against the National Communication Authority over its intent to regulate the telcos space to ensure fair competition.

MTN filed the suit after it was declared as a Significant Market Power (SMP).

According to MTN, that declaration as SMP was done in breach of their right to be heard and a violation of procedural fairness.

NCA countered with evidence of consultations since 2015 which culminated in an Analysis Mason Report of 2016.

In dismissing the suit, the Court held that there is sufficient evidence of consultation for the NCA to so act, and that NCA did not act contrary to law.

The Court opined that the opportunity offered to MTN to make input by way of data fulfills the requirement of due process and procedural fairness.

The Court however added that MTN is still permitted by law to engage NCA on the implementation.

Following the directive, the NCA was expected to start an immediate implementation of specific policies to ensure a level-playing field for all network operators within the industry, with emphasis on maximizing consumer welfare as the growing dominance of MTN “has impacted negatively on competition and consumer choice, necessitating corrective action.”

But in a statement issued on Friday 26th June, 2020, MTN Ghana said although there were ongoing discussions with the regulatory authority to decide the way forward, NCA has already began implementation of the specified policies, hence, its decision to finally seek redress at the law court, after it was officially notified of the decision.

“While these engagements have been largely encouraging, the NCA continues with implementation of the specified interventions. As such, MTN Ghana has after much consultation, and as a last resort, made the difficult decision to resort to the Law Courts for redress in the form of a judicial review of NCA’s decision, to ensure the observance of the requirements of procedural fairness.”

Following the announcement, some industry watchers appealed to government to tread cautiously with its plans to implement some policies to limit any market imbalance in that sector. They also cautioned government not to subjectively use regulation against law abiding businesses They say the move appears to be one that will punish innovative and successful businesses.

But a Telecoms Analyst, Patrick Boateng, said the decision by government to provide a level-playing field for all network operators and break the dominance of MTN Ghana in the telecommunications sector is not a punishment.

He said the move is to create an equal space for all industry players and forestall negative competition.