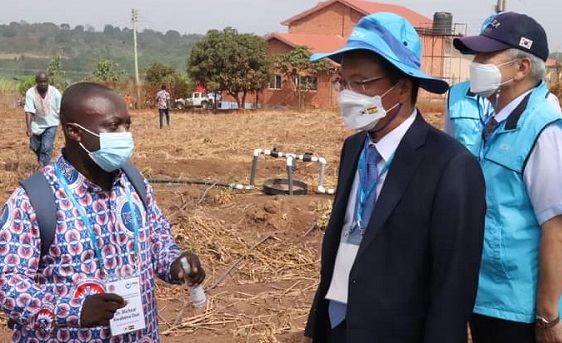 The Crop Research Institute of the Council for Scientific and Industrial Research (CRI-CSIR) says it will release two new varieties of tomatoes early this year to address the over-reliance of tomatoes import from neighbouring Burkina Faso.
The new varieties are the CRI Kwabena Kwabena and KOPIA Tomato.

The Korean Programme on International Agriculture (KOPIA) and CSIR-CRI embarked on a joint research to breed improved varieties of tomato that were adaptable to the Ghanaian environment.

Certified seeds of the high-yielding and disease resistant variety are expected to be made available to farmers on time for planting to take-off.

Some tomato farmers at Akumadan

Subsequently, the CRI has organised a cultivation technology training workshop on the new varieties for farmers at Akumadan, the hub of tomatoes production in Ghana, in the Offinso North Municipality of the Ashanti region.

The project was funded by the KOPIA and the government of Ghana through Obaatanpa Care.

Lead researcher and a senior research scientist at the CSIR-CRI, Dr. Michael Kwabena Osei, said the high yield of the two varieties has the potential of solving the perennial tomato shortage in Ghana, noting that they do well in major and minor seasons.

He explained that the new varieties mature early, taking 55days rather than the usual 80 to 90 days to mature.

“It’s yield are 20 tons per hectare, which is three times more than the normal yield which is between 7.5 to 10 tons per hectare. Their fruit sizes are also very big, with a lot of solids and less seeds,” he noted.

He advised farmers to practice good agronomic practices to get the full potential of the varieties.

“These varieties are tolerant to certain diseases, more importantly the Tomato Leaf Blight disease. Indeed, in the rainy season where there are high incidence of the disease, these varieties are able to tolerate no matter de the symptoms on the field of farmers,” he said.

Dr. Osei added that the total soluble solids of the varieties were very high, noting that the standard is usually between 4.8 and above.

He said it makes the variety a dual purpose one, for both the fresh markets and processing factories.

“Per the research, the varieties could do well in the forest and transitional zones covering the Ashanti, Bono, Bono-East and Ahafo Regions of Ghana. It has prospects of performing well in other agro-ecological zones considering good farm practices,” he noted.

Ambassador
The Korean Ambasador to Ghana, Mr. Lim Jung-Taek, said achieving greater self-sufficiency in tomato production with enhanced productivity had become one of the urgent national tasks for the Ghanaian government.

He indicated that it was the reason KOPIA and CSIR-CRI embarked on a joint research to breed improved varieties of tomato that were adaptable to the Ghanaian environment.