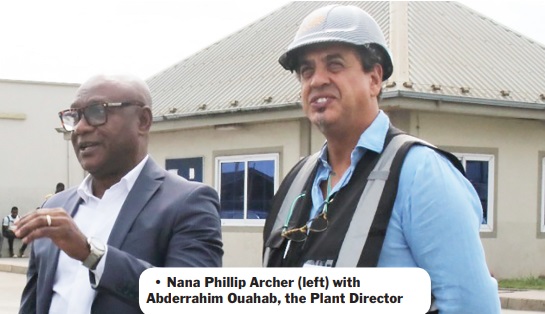 Indigenous cement producer, Dzata Cement, has reiterated calls on the government to grant waivers on the Value Added Tax (VAT) component of the charges the company pays at the ports on raw materials imported for the production of cement.
According to the Managing Director of Dzata Cement, Nana Phillip Archer, instability in the local currency had significantly pushed up operational cost of cement producers, necessitating the passing on of the cost to consumers in the form of higher prices of cement.

Speaking during a courtesy call on him by the Editor, Graphic, Kobby Asmah, at the factory, located near the Tema Port, last Monday, Nana Archer was of the view that taking away the VAT component would impact positively on the cement economy, since producers would be in a position to reduce their import and production costs.


The visit was to enable Mr Asmah to deepen the relationship between the Daily Graphic and its stakeholder brands in Tema in an effort to enhance the outlook of the brands.

Officials of the company took Mr Asmah on a tour of the facility, which is devoid of dust pollution, a common phenomenon associated with cement production.

Dzata Cement commenced commercial production in August, 2021 by importing semi-finished first grade Cement Type I 42.5 R (Cem 1), making it the cement producer with the highest grade cement in the country.

Nana Archer said the company also paid fumigation levy on its imports, whereas vessels that brought in the semi-finished cement did not access the fumigation facilities, considering the nature of the imports.

“When you come to the port, we have to also pay all manner of fees and charges, which are denominated in the US dollar, while we produce and sell in the Ghanaian cedi, which continues to struggle against the major trading currencies,” he said.

He stressed that Dzata Cement, which is the sole indigenous cement producer among the several producers in the country, wished to partner the government to develop the infrastructure needs of the economy.

“We would love it if the government could look at us and offer us the needed support which could go to positively impact the industry and the downstream market for cement,” he said.


He pointed out that while cement prices continued to rise on the market, owing to high production costs, particularly raw materials, people’s disposable incomes kept reducing.

“However, the volume of cement consumption, which stands at over eight million tonnes annually, will require that people’s purchasing power go in tandem with production,” he stated.

Dzata Cement, an eco-friendly company which produces 100,000 tonnes of cement on a monthly basis and employs 400 people, is seeking to double up its production capacity.

It is thus investing $45 million in the construction of silos that can store some 40,000 metric tonnes of cement, when completed, as part of phase two of the factory’s development.

While some local producers are heavily dependent on clinker imports to complement the local raw material which they grind for their production, Nana Archer pointed out that Dzata chose the importation of the semi-finished cement primarily to ensure that there were no inconsistencies in the quality of the cement it produced.


With Ghana’s cement consumption said to be over eight million tonnes annually, Nana Archer said that would require that the sector grew around 527 per cent annually, thereby requiring a quantity of 6.4 million tonnes of clinker to aid production.

Energy conservation, he said, also influenced the production model, as, according to him: “It takes 36 to 38-kilowatt hours of power to grind a tonne of cement, and considering the challenges we have as a country, we took a decision to bring in semi-finished cement products and add value to them so that we can reduce our energy usage significantly.”

He commended the Graphic Communications Group Limited (GCGL), through its flagship, the Daily Graphic, and the other brands for the support they had given the company over the last year and hoped that they would continue to play their advocacy role to canvass support for the local industry.

Graphic’s commitment Responding, Mr Asmah, who was impressed by Dzata’s good environmental practices, said his engagements were aimed at improving the relationship between the Daily Graphic and industries in Tema, since they remained critical stakeholders in Graphic’s business.

“Our goal is to deepen the engagements and see how we can tell stories that promote local enterprises such as Dzata that are making strides and contributing to the economy,” he said.

While expressing his delight that an indigenous company had ventured into the cement production sector, Mr Asmah said it behoved Ghanaians to be proud of the achievement and patronise the cement.

“We at Graphic, in playing an advocacy role in economic and social sustainability, will extend similar support to ensure that enterprises set up by indigenous Ghanaians become successful,” he said.

Doing so, the Editor said, required information and knowledge sharing, adding: “I will urge you to consider Graphic as a trustworthy partner, since we have a nation-first attitude.”