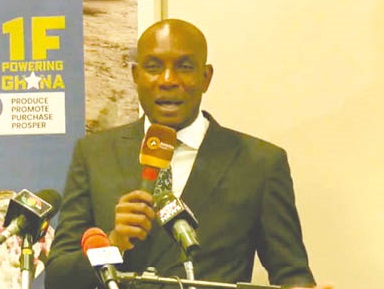 The Ghana Export-Import Bank (GEXIM) has pledged support for the Central Region’s non-traditional resources to ensure that they become exportable to boost the nation’s foreign exchange reserves.
According to the Head of Business Development and Project of GEXIM, Bright Evans Darko, if the Central Region had the means to add value to its unconventional raw materials to make them exportable, it would broaden its economic and investment horizons.

The GEXIM, he continued, had recognised the region’s enormous potential in terms of its non-traditional raw materials and was ready to put measures in place to support it by establishing the necessary conditions for value addition.

He was speaking at a business forum with metropolitan, municipal and district chief executives in the region as part of the Central Regional Trade and Investment Fair in Cape Coast.

“It is the primary responsibility of the bank to take the leading role in assuring all key development stakeholders, especially within the Central Region. That is why we are open to partnerships leading to the transformation and development of the non-traditional business economy of the region,” he said.


Mr Darko pointed out that due to insufficient raw materials, factories and other businesses in the region were not producing to their maximum capacity.

He called for a prompt resolution of the issue and active participation from all parties involved.

He noted, for instance, that the Ekumfi Juice Factory, which sold to customers outside the nation, was underproducing because it lacked enough pineapples for production. He therefore urged traditional leaders, particularly those in the area, to support people who were prepared to become outgrowers by providing the enabling environment.

“The famous Ekumfi Factory produces only eight to 10 days in a month due to inadequate raw material. We therefore call on all authorities to collaborate with the factories to address this raw material challenges. Addressing these challenges will create more jobs. It will also mean profit for those companies, economically empower the people, thereby alleviating poverty in the region,” he stated.

He said that the bank had launched an initiative for raw material development projects as part of its effort to solve the problems.

“Under this initiative, farmers will be supported through an outgrower scheme to grow the above crops and get offtakers who will buy everything that they produce. A technical consultant will be engaged to assist them on good agronomic practices,” he explained.

The Central Regional Minister, Justina Marigold Assan, stated that the Regional Coordinating Council would intensify efforts to improve the enabling environment in order to increase the socioeconomic gains of the region.

She asked for the Exim Bank’s full cooperation and active engagement, owing to its special position as the leading government agency that directs export and import activity, to aid the Central Region to realise its objective of becoming a commercial and investment hub.