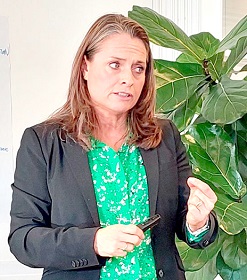 The head of Agroecology at the Aarhus University, Denmark, Professor Jorgen E. Olesen, has called on the Government of Ghana to prioritise investment in irrigation, storage and transportation infrastructure to give more meaning to the government’s planting for food and jobs (PFJ) policy.
He noted that although the PFJ was a good policy that could lead to increased food production, there was no guarantee that increased food volumes meant food security.

Speaking in an interview with the Daily Graphic last Thursday in Copenhagen, Denmark where 24 African journalists are currently participating in a fellowship on climate crisis reporting, Prof. Olesen said, “Food insecurity does not arise only because of lack of production; it arises because the food that needs to be transported, stored properly, processed and cart to ready market centres go waste.


“In effect, Ghana needs to think about these food value chains and build it well because it is just as important and production,” he said.

Again, he observed that it was important for the government to invest more in irrigation infrastructure to ensure that rain water that often caused flooding was turned into a resource for agriculture production.

Journalists attending the fellowship are drawn from countries such as Ghana, Nigeria, Egypt, Niger, Uganda, Kenya and South Africa.

The participants had started with two weeks in Denmark, undertaking field visits to climate sustainable green solutions and having discussions with climate summit negotiators, lobbyists, campaigners, researchers and media professionals.

Those field trips and interactions are meant to give the participants relevant background knowledge to report at the 27th Conference of Parties (COP27) from the perspective of their countries and continent.

Prof. Olesen also underscored the need for stronger collaboration between the government and other stakeholders for sustainable agriculture production, especially so when the climate crisis required partnerships to overcome.

“Here in Denmark, there is close relationship between research universities, ministries and farmer organisations and financial institutions.

“We try to align things such that if there are challenges, we are able to work together to address them. This kind of collaboration must be encouraged in Ghana and other African countries,” he said.

In the wake of increasing threats of food insecurity on the continent, resulting from the climate crisis, they said it was important for African countries to invest in sustainable systems that would boost food production, improve transportation, processing and storage to avoid post-harvest losses and wastage.


Those who made that call were the head of Agroecology at the Aarhus University, Denmark, Professor Jorgen E. Olesen; the Chief Executive Officer (CEO) of Food Nation, a public-private partnership institution, Lise Walbom; and the Climate Director at the Danish Food and Agriculture Council, Niels Peter Norring.

In her interview with the Daily Graphic when the DFC fellows visited Food Nation last Friday, Mrs Walbom said stronger collaboration among the various actors in the agriculture value chain was to ensure sustainable food production, especially in Africa.

She stressed that with the agriculture sector responsible for a fourth of the global greenhouse emissions, sustainable production using green technologies would play a great role in reducing the climate crisis.

For his part, Mr Norring observed that aside from the climate crisis, the increasing world population and the associated sprawling settlement pattern posed serious threat to global food security.

For instance, he said the global population was estimated to hit 10 billion people by 2050 and that meant that there would be booming food demand, “which implies that countries must produce more on less amount of land.”

He added that while current UN statistics showed that there were more than 800 million undernutritioned people that must be fed, global warming had escalated challenges in the agriculture sector.