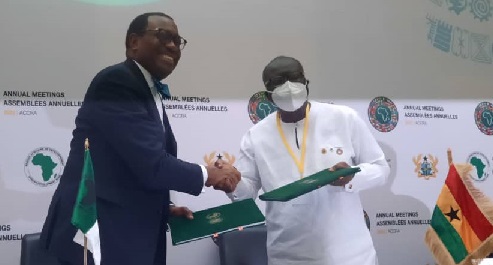 The government has signed a grant agreement of $69.88 million to implement the scaling-up renewable energy programme (SREP).
The agreement was signed on May 25, 2022, between the government and the African Development Bank (AfDB), the Climate Investment Fund (CIF) and the Swiss Government Federation.

Also present at the signing was the Minister of Energy, Dr Matthew Opoku Prempeh, and the Governor of Switzerland AfDB Group, Dominique Paravicini.

Project
The project, expected to be completed between 2022 and 2025, is aimed at electrifying island communities in the country that are not connected to the national electricity grid.

When fully implemented, it is also expected to contribute to the achievement of the universal access to electricity by 2030 and unlock financing opportunities to achieve the accelerated and sustainable development of the country’s renewable energy sector.


The project consists of the design, engineering, supply, construction, installation, testing and commissioning of mini-grid systems, stand-alone home systems located in island communities, and net metering with solar photovoltaic (PV) systems in the distribution network of the distribution utilities in the country.

Climate-conscious
Mr Ofori-Atta said the agreement provided a solid foundation for the next stage of climate-conscious development across the country.

He said the mini-grid electrification and net metering solar PV projects were fully aligned with the government’s overarching ambition of increasing the contribution of renewable energy in the generation mix to 10 per cent by 2030 while achieving set emission reduction targets.

“We are mindful that through the SREP, we can provide stable and, indeed, cheaper electricity to hundreds of people across the country, and in the process, we could usher in new and exciting economic opportunities, particularly, for women in our rural areas,” Mr Ofori-Atta said.

“We all have a vested interest in ensuring that projects of this nature are an unqualified success,” he added.

The Finance Minister explained that the country’s electrification access rate was estimated at 86.7 per cent, suggesting that 13.7 per cent of the country’s population did not have a reliable or stable access to electricity.

To help improve the situation, he said development partners, governments and the private sector must work together to ensure that “no one is left behind”.

Renewable energy
Dr Adesina said it was important to ensure that about 15 per cent of the population that had no access to electricity were provided with electricity.

“Minister, I know you like to quote the scriptures, so I will say, ‘Let there be light’,” he said, to a chorus of laughter in the hall.

Dr Adesina added that the AfDB Group and its partners were positive that the project would provide clean and renewable energy for island communities and those in hard-to-reach areas.