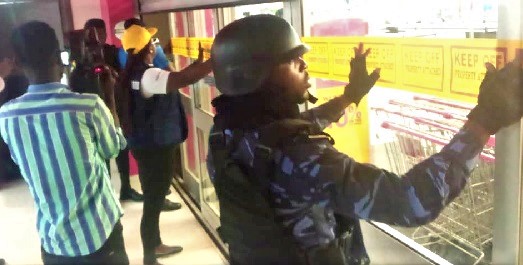 The Ghana Revenue Authority (GRA) yesterday[October 12,2022] closed down four more retail outlets for failing to integrate their systems into the authority’s electronic Value Added Tax (VAT) invoicing system.
They are game outlets at the Accra, Achimota and the West Hill malls. The fourth outlet is the Palace Mall at Community 25 in Tema.
Except for Palace Mall, which was already closed at the time of the GRA’s team, led by the Head of Enforcement at the Accra Central Area Office, Joseph Annan, the three game outlets were in operation during the visit to their premises.
The GRA, last Tuesday, closed down five shopping centres in Accra over failure to integrate their Value-Added Tax (VAT) invoices into the authority’s newly deployed electronic (e) invoicing system.
Customers and staff were allowed to leave the facilities, especially that of the game outlets, for the authority to close them.
The authority’s tape and padlocks were, subsequently, used to close the facilities.
In an interaction with the media, Mr Annan said the exercise was a continuation of what it started last Monday.
He said outlets were part of the 50 selected tax-payers that were supposed to hook their system onto the GRA’s system but they failed to do so.
“The system is just to authenticate receipts or invoices that are produced from machines that are being used by our tax payers and also to report real time transactions to our system so that as you are selling out there in your outlets, we receive whatever transactions you are having on our system so that we are able to monitor in real time and capture all sales that you make,” he said.
Not happy
Mr Annan said the GRA was not comfortable in closing down facilities since they employed Ghanaians who would have to go home until the system in their places of work was corrected.
“But then we say that certain things need to be done, if that is what will bring the results,” he said and that “all we are asking for is for them to hook their system onto our system”
That, Mr Annan said, was all the authority was asking for and that if any of them should integrate their system onto our system, immediately, their facilities would be opened for business to proceed.
According to him, the tax-payers had been engaged over months when their issues were brought up for discussions during which the issues were explained to them.
He said after the engagements, they were given enough time – over two months, for them to hook onto the system.