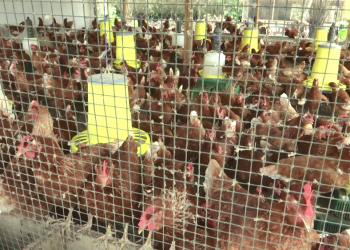 The President of the Poultry Farmers Association, Victor Oppong Adjei says government has refused to grant interventions to save the local poultry industry from collapsing.

Lamenting the woes of the industry on the Citi Breakfast Show on Wednesday, August 17, 2022, Mr. Adjei said poultry farmers are faced with a myriad of challenges; with key among them being the cost of production.

“We have been facing so many challenges but have not been given the listening ears.”


According to the Association, most poultry farms in the country are virtually empty.


The Association is worried that the imported frozen poultry may take over their business.

Victor Oppong Adjei bemoaned the fact that the local industry continues to wrestle with the cheap prices of imported poultry.

“There should be a policy to regulate the whole industry to reduce the imports and promote the local industry,” he suggested.

“We have been saying that poultry alone can provide one million jobs, but are we going to sit down for the industry to collapse?” he quizzed.

Reacting to government’s rearing for food and jobs initiative, the association maintained that the local industry has not benefited from the policy enough.


“Unfortunately, we allowed the neighbouring countries like Nigeria, Burkina Faso, Benin, and others to troop in to buy all the maize to the various countries, therefore, creating shortage in Ghana”.

“Government invested about 978 million cedis into this programme, so it is the local industry that has to benefit from the initiative”.