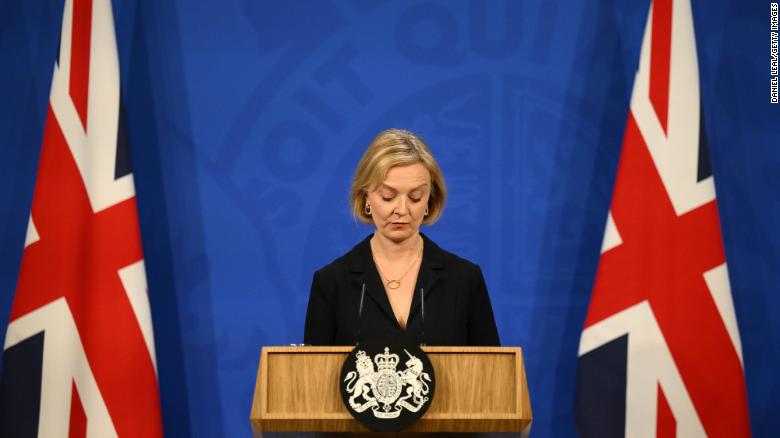 LONDON, ENGLAND - OCTOBER 14: Britain's Prime Minister Liz Truss holds a press conference in the Downing Street Briefing Room on October 14, 2022 in London, England. After just five weeks in the job, Prime Minister Liz Truss has sacked Chancellor of The Exchequer Kwasi Kwarteng after he delivered a mini-budget that plunged the UK economy into crisis. (Photo by Daniel Leal-WPA Pool/Getty Images)

Liz Truss will become the shortest-serving prime minister in British history, after announcing her intention to resign just six weeks into a disastrous term that pitched Britain deep into political and economic turmoil.

Truss said Thursday that she would step aside for a new leader to be chosen within the next week, after a growing number of her own Conservative Party’s lawmakers said they could not support her any longer.

“Given the situation, I cannot deliver the mandate on which I was elected by the Conservative Party. I have therefore spoken to His Majesty The King to notify him that I am resigning as Leader of the Conservative Party,” Truss said while standing outside the famous black door of 10 Downing Street, the same spot in which she had promised to put the UK back onto the path to economic growth and stability just six weeks earlier.


The announcement brings to an ignominious end a catastrophic tenure in Downing Street, which appeared doomed ever since the announcement of Truss’s flagship economic agenda sent markets into panic. A record rise in UK government bond prices sent borrowing costs surging and forced the Bank of England to make three successive interventions to rescue overstretched pension funds. The pound at one point hit an all-time low against the US dollar.

Truss said she would stay in Downing Street until her successor is named.

Graham Brady, who chairs the 1922 Committee which represents rank-and-file Conservative Members of Parliament, said Thursday that the new party leader — and therefore prime minister — should be in place before the end of October.

Candidates to replace Truss will need at least 100 nominations from British Conservative lawmakers, Brady said later on Thursday, a move that effectively narrows the field of potential candidates.

The threshold allows for the possibility of three candidates, maximum, he said. There would be an online vote for Conservative Party members if two candidates make it through the parliamentary stages, party chairman Jake Berry added.

If only one candidate emerges, there could be a new party leader and Prime Minister by Monday, Brady said.

Truss had tried to save her position by admitting her plan was a mistake and replacing her chancellor and long-time ally Kwasi Kwarteng with Jeremy Hunt, a staunch supporter of former Chancellor Rishi Sunak in the leadership contest over the summer.

In the end, even that was not enough.

On Wednesday, Truss lost another top official when Home Secretary Suella Braverman dramatically quit just a few weeks into the job, using her letter of resignation to launch a blistering attack on the prime minister’s leadership.

“The business of government relies upon people accepting responsibility for their mistakes. Pretending we haven’t made mistakes, carrying on as if everyone can’t see that we have made them, and hoping that things will magically come right is not serious politics,” Braverman wrote in a critique of Truss’s numerous U-turns on taxes and public spending.


Making a bad day even worse, chaotic scenes unfolded in the UK Parliament on Wednesday evening during a vote on whether to ban controversial fracking for shale gas.

Lawmakers reported that aides for Truss had manhandled MPs into the voting lobby to force them to vote against the ban proposed by the opposition Labour Party. Politicians in the lobby tweeted eyewitness accounts alleging that MPs were being physically dragged to vote in the government lobby, amid angry scenes of shouting and altercation.


House of Commons Speaker Lindsay Hoyle announced Thursday that he had ordered an investigation into the allegations.


Shortest tenure ever
The names of potential successors began floating around even before Truss announced she was going to resign.

Leader of the House of Commons Penny Mordaunt, who stepped in for Truss during a difficult parliamentary debate earlier this week and also stood in the leadership contest over the summer, will likely be in the running. Sunak, who was Truss’ biggest rival in that contest, is another possible candidate.

Truss announced her decision to leave on day 45 of her tenure. George Canning previously held the record for the shortest term in Downing Street, having served for 119 days until his death in 1827.

Her move ensures a fresh power struggle within the ruling Conservative Party, which has hemorrhaged public support for the past year and has now overthrown Boris Johnson and Truss in the space of a few months. The new prime minister will be the third since the last general election in December 2019 and the fifth since the Conservatives came into power in 2010.

Earlier this year, Truss’s predecessor Johnson narrowly survived a confidence vote in his leadership. But he resigned weeks later when dozens of ministers and members of the government quit, citing a lack of confidence in his government.


What’s all the fuss about fracking in the UK?
Truss was elected the Conservative Party leader in early September. The September 6 audience during which Queen Elizabeth II officially appointed Truss as the new prime minister, the 15th of her reign, was one of the last duties carried out by the monarch before her death on September 8.

The new prime minister, whoever that may be, will become the first to be appointed by King Charles III.

Keir Starmer, the leader of the opposition Labour Party, which is enjoying a huge lead in opinion polls, on Thursday repeated his calls for an early general election.

“After 12 years of Tory failure, the British people deserve so much better than this revolving door of chaos,” the opposition leader said in a statement posted on Twitter.

“The Tories cannot respond to their latest shambles by yet again simply clicking their fingers and shuffling the people at the top without the consent of the British people,” he added.

“The interests of the Tory party should concern no-one right now. A General Election is now a democratic imperative,” Sturgeon said on Twitter.

The next general election is due to take place no later than January 2025, but the prospect of Britain seeing its third prime minister since the last poll in 2019 would heap pressure on Truss’ successor to ask the public for a new mandate.

The British pound was trading 0.5% higher against the dollar after Truss announced her resignation, indicating that investors welcomed the decision.