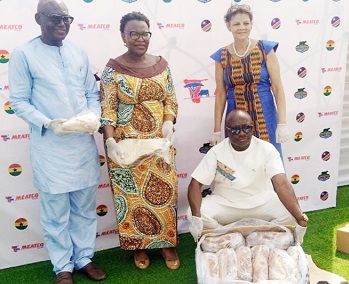 The Namibia High Commissioner to Ghana, Selma Ashipala-Musavyi, has given an assurance of deepened trade relations between Ghanaian and Namibian businesses.
The increased relations, she explained, would enhance the activities of the businesses and capture new foreign direct investment.

She said that at an event in Tema on June 29, to mark the entry of the first consignment of Namibian beef imported to Ghana.

The first official shipment of 15 tonnes of beef products from Namibia is a partnership between the Namibia Meat Corporation (Meatco) and Abanga Farm and Food Systems, Ghana, the exclusive distributor of Namibian beef in Ghana and West Africa.

Namibia is renowned for its export of beef and related products, while Ghana is a major meat importer.


The beef from Namibia is grass-fed with no added hormones which makes it unique.

With the high quality of breed, it is not surprising that Namibia in February, 2020, became the first African country eligible to export meat to the United States of America.

Ms Ashipala-Musavyi indicated that the maiden shipment of Namibian meat products to Ghana gave commercial meaning to the trade relations between the two countries, stressing that aside from bringing the people and especially the private sector together, it was taking place against the backdrop of the impact of COVID-19 and the ongoing conflict in Europe on the global supply chains.

“Taken together, the impact of these two developments demonstrate the need for Africa to begin to consume in earnest what Africa produces.


I am not advocating for isolation. I am advocating and strongly so, for Africa to lessen dependency on others for consumer goods,” she stated.

She expressed the hope that the partnership between Meatco Namibia and Abanga Farm and Food Systems would mark the beginning of a long and mutually beneficial commercial relationship between the two countries.

The Director, Africa and Bilateral Affairs at the Ministry of Foreign Affairs and Regional Integration, Charity Gbedawo, on behalf of the Minister of Foreign Affairs and Regional Integration, Ms Shirley Ayorkor Botchwey, described the occasion as a historic one because it marked another phase in Ghana-Namibia bilateral relations which dates back to the liberation struggle in Southern Africa in the 60s and the significant role played by Ghana’s first President, Dr Kwame Nkrumah, in supporting Namibia through the period.

Mrs Gbedawo said with the coming into force of the African Continental Free Trade Area (AfCFTA), Ghana and Namibia had decided to give greater attention to their bilateral and intra Africa trade by taking advantage of the provisions of the huge market of 1.2 billion people.

He said with the right support, the private sector could propel the economic development.
Mr Abanga said with the vast experience and knowledge of Meatco, Ghanaians were guaranteed quality Meatco products approved by the various regulatory agencies.