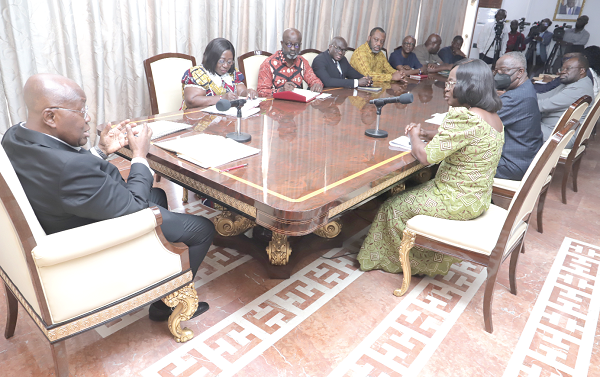 President Nana Addo Dankwa Akufo-Addo has said that due to the successful implementation and completion of compacts One and Two of the Millennium Challenge Corporation (MCC), he will make a case at the highest level in the United States for a third compact.
He expressed the hope that the US authorities would sit around the table for a new compact, looking at Ghana’s record in executing the compacts and its status as a truly functioning and stable democracy in the region, among what constituted the requirements to qualify for a compact.

The President gave the hint when the Chairman and a board member of the Millennium Development Authority (MiDA) presented the final report of the second compact to him at the Jubilee House in Accra last Tuesday.


The board, which was sworn in in 2017, supervised the execution of the second compact, which ended last Tuesday.

President Akufo-Addo said Ghana’s commitment to the rule of law remained unshaken and continued to deepen; therefore, the various elements which constituted the requirements for accessing the compact continued to be very present in the country.

He said Ghana believed that there was every reason for it to get another one, especially with the successful implementation of the two compacts, the first on agriculture and the second in the energy sector.

“If still the idea of compact is on the table in Washington, we will be interested in the discussion to enable us to embrace it for the industrial development of the country,” he said.

He described the presentation of the report by the MiDA Board as momentous in terms of the country’s relations with the US.

He recounted how, during the Kufuor Administration when the compact was initiated by the Bush government in the US, Ghana had informally made an input into its design.

The President expressed the commendation of the people of Ghana to the US government for the first compact, which was $547 million, and the second, which was over $400 million.

He also commended members of the board for the vigilance they exhibited in the execution of the work.


He noted that the country required more energy for its industrialisation drive, particularly when it wanted to venture into bauxite development, which meant that it required a more viable and reliable power sector.

President Akufo-Addo said although during the execution of the Compact Two there had been a temporary glitch over the Electricity Company of Ghana (ECG) and the PDS issue, “these are behind us and we are hoping that the American Administration will also understand that it is behind us, and that there is still a possibility for us to sit around the table to construct something that will mean a lot”.

He said the country was a functioning and strong democratic state, where majority of the people were committed to democratic values, and expressed optimism that despite the difficulties that the changing of government brought about, the change must be done through the ballot box.

The MiDA Board Chairman, Prof. Yaa Ntiamoah Baidu, said the board was charged with the responsibility of overseeing the implementation of the compact.

She said by the revised compact end date, which was June 6, this year, all projects retained and prioritised for implementation had been completed, inaugurated and handed over to the beneficiaries.


Some of the beneficiary institutions include the ECG, the Ghana Grid Company Ltd, the Ghana Standards Authority, the Energy Commission, the Public Utilities Regulatory Commission, the Ministry of Education, the Korle Bu Teaching Hospital and the Kwame Nkrumah University of Science and Technology.

Prof. Baidu said the revised compact funding following the termination of the concession agreement was $347 million and that had been fully disbursed.