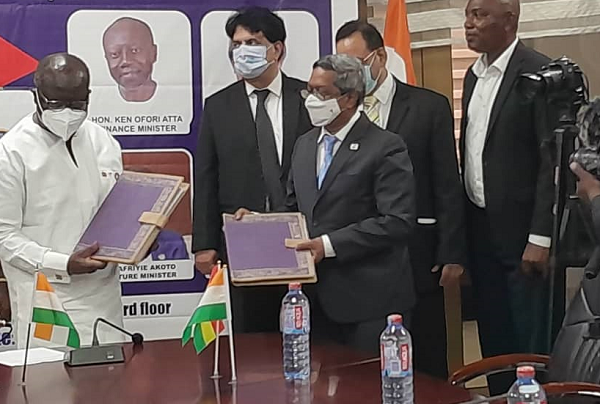 Ghana is to establish an assembling plant for agricultural equipment.
To be sited at Essienimpong in the Ashanti Region, the $24.98-million project will start immediately.

This follows a credit agreement signed between the governments of Ghana and India to be financed by the India EXIM Bank.

It will be executed by the Action Construction Equipment Limited of India.

The plant will assemble tractors and backhoe loaders and also undertake the fabrication of agricultural implements.

The Minister of Finance, Ken Ofori-Atta, and the Resident Representative of the India EXIM Bank, G. Selva Kumar, signed for their respective governments.

In line with the project implementation schedule, the construction and installation of the plants and machinery, as well as other civil works, will be completed within 18 months.

Training programmes will be organised by experts from India for Ghanaians who will man the plant.

The project aims at bringing farm machinery within the reach of small and marginal farmers by popularising the use of agricultural machinery.


To be owned by the government of Ghana, the plant will, however, incorporate a public-private limited liability company to operate and manage it, with the Ministry of Food and Agriculture (MoFA) and the Ministry of Finance playing oversight responsibilities.

In a brief remark, Mr Ofori-Atta expressed gratitude to India for the appreciable support given for Ghana’s development over the years.

He mentioned a number of key ongoing projects in the country being supported by India, including the 97.620-km railway line from Tema to Mpakadan, valued at $447.173 million, which is 93.90 per cent complete.

He said the project was in line with the government’s initiative to formalise the economy, improve the agricultural sector, diversify the manufacturing base and overhaul the development agenda.

In response, Mr Kumar expressed his excitement at the siting of the project in Ghana.

“It is a game changer for the people of Ghana,” he said of the plant.

“We believe that Ghana, as an agrarian economy, can benefit from this project,” he added.

Mr Kumar said the government of India and the EXIM Bank identified the project as one that could build a partnership between the two countries.

He recalled that the EXIM Bank had, since 2004, been partnering various projects in the country, saying that India was proud of the partnership between the two countries.

The acting Chief Director of MoFA, Richard Twumasi Ankrah, said agricultural mechanisation had been identified as one of the major drivers of increased agricultural productivity and improvement.

“To this end, the ministry has, over the years, imported various agricultural machinery, including tractors, for sale to farmers in the country.

“However, these initiatives, apart from the huge investment on the government purse, have been challenged by the frequent breakdown of the machinery due to over-reliance on foreign products that are not able to adapt to our tough terrain, lack of spare parts, etc,” he said.

Mr Ankrah said MoFA saw the establishment of the assembling plant as a major contributory factor to the success of the Planting for Food and Jobs programme.