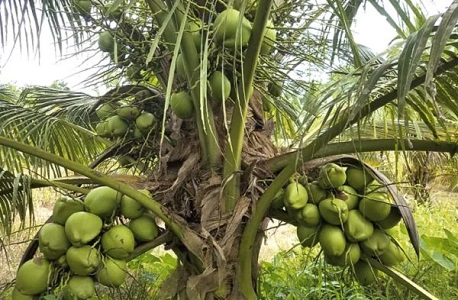 The 2022 edition of the International Coconut Festival has been launched at Ellembele in the Western Region, with renewed promise to develop the coconut industry and make it a significant revenue source for government.
Themed “Repositioning Ghana’s Coconut Sector for Accelerated Industrialisation”, it aimed at exploring ways of expediting the growth of the sector by adding value to the raw materials produced from coconut.


She indicated that a partnership with the African Coconut Group, which saw some policy initiatives being rolled out, felt it has seen some significant successes being chalked up in the coconut production sector.

“GEPA has made modest but quite significant investments in the sector since 2017 by procuring and distributing disease-tolerant coconut seedlings to coconut farmers across the major coconut farming regions in the country with nearly 7,000 seedlings covering some 11,000 acres in cultivation presently,” Ms Asare said.

She said whereas they recognise the fact that the Ministries of Food and Agriculture and Local Government and Rural Development had also invested significantly in the sector through the Planting for Export and Rural Development (PERD) Programme, GEPA would continue to collaborate with the relevant stakeholders to ensure the sector’s sustainability.

Ms Asare commended the government for setting up the Tree Crops Development Authority, which she said would positively impact the coconut industry.

“We also applaud government for the establishment of the authority which GEPA and other stakeholders had strongly advocated for and we believe that the authority’s mandate and activities would inure to the benefit of the sector, coconut being one of the key tree crops under the authority,” she said

She called for greater inter-institutional cooperation to quicken the pace of the sector’s development.


The Chairman of the African Coconut Group, Davis Korboe, in his remarks, said the celebrations would be characterised by exhibitions of high and low-level technologies in the coconut industry, business seminars, financial support platforms, networking, talks, field visits, senior high and university level competition, colloquiums, among others.

The objective of the festival, he pointed out, was to bring investors from across the world to export coconut from Ghana.

Mr Korboe said that whereas COVID-19 equally affected the sector, GEPA’s support, he said, however, ensured some gains were made during the pandemic and exp