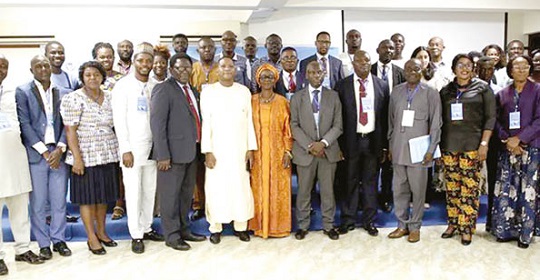 Speakers at the Canada-Ghana Chamber of Commerce (CANGHAM) Chief Executive Officers’ (CEOs) Breakfast Meeting in Accra have called for a stronger economic partnership between the two countries to build a resilient business ecosystem for sustainable development.
Such a partnership, they said, should focus on exploring more investment opportunities in strategic areas where natural resources could be leveraged for the mutual benefit of the two countries.

They observed that in spite of the daunting global economic challenges occasioned by the COVID-19 pandemic and the war between Russia and Ukraine, strengthening the economic ties between the two countries would ensure that local resources were harnessed for development.


The speakers included the CEO of the Ghana Investment Promotion Centre (GIPC), Yoofi Grant; the Executive Vice-President and Country Director of the Asante Gold Corporation, Frederick Attakumah; a Senior Trade Commissioner at the Canadian High Commission, Andrew Maharaj, and the President of CANGHAM, Alexander Nortey.

The objectives of the breakfast meeting were to network with other CEOs and also share ideas on how to develop business relationships.


Mr Grant said Ghana was a better destination for foreign investment because it had a conducive business environment and political stability.

He said Ghana was also endowed with enormous natural resources that needed strategic partnerships to be properly harnessed for growth.

The CEO further said with the African continent hosting 60 per cent of the world’s arable land and an estimated 40 per cent of global resources, the continent would be more relevant in what he described as “the rebirth global economy”.

“The current population of Africa is about 1.4 billion people, and 60 per cent constitute the youth, a pool of labour that can be transformed to develop the continent,” he added.


Mr Attakumah, for his part, said the significance of an economic partnership between the two countries was evident in the mining sector where Canada had invested heavily in major companies.

He said it was important to prioritise bilateral partnerships that would pave the way for private sector investment in the industry, adding that Canada’s mining industry thrived on the use of modern equipment and green technology, which he said could be replicated in Ghana.

Mr Nortey mentioned key areas of collaboration between the two countries to include information and communications technology (ICT), agribusiness, mining and non-traditional exports.

“We want to also see partnerships in the small and medium enterprises (SMEs) sector to create linkages for such businesses to expand,” he said.


The president called for tax exemptions to motivate foreign investors to bring in machinery to invest in the local economy.

For his part, Mr Maharaj said Canada valued its economic relations with Ghana because trade was beneficial to the development of both countries.


He said in deepening such ties, key areas, such as clean energy, ICT and education should be prioritised, adding that the economic challenges brought about by COVID-19 and the Russia-Ukraine war were a wake-up call for countries to work together to build robust systems that could withstand such shocks.