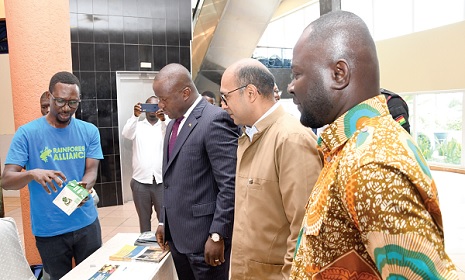 The Deputy Dutch Ambassador to Ghana, Katja Lasseur, has expressed the commitment of the Netherlands to leverage its expertise to support Ghana to improve on its agriculture sector.
She explained that the Netherlands as the second largest exporter of agricultural products in the world, had the potential to share knowledge, technology and investment opportunities to support efficient use of land in the country.

Speaking at the opening of the 2022 Orange Cocoa Day (OCD) in Accra last Monday, the deputy ambassador said although the Netherlands was a small country in terms of land size, its total agriculture exports for last year reached €110 billion.


Ms Lasseur stated that investment in agriculture thrives only on a well-structured land tenure system.

“Land fragmentation and insecurity does not promote investment in the agriculture sector,” she said.

The Orange Cocoa Day was organised by the Netherlands Embassy in Accra, collaboration with European Union (EU) Delegation in Ghana, European Institute, Meridia and other firms active in the cocoa sector.

It was the theme, “exploring how improved access to land and tree tenure promote sustainability in the cocoa value chain,” and brought together stakeholders to discuss the sector-wide developments in cocoa and their readiness to support the sector in the country.

The OCD also served as a platform for exhibitors which consisted of Tropenbos Ghana, Niche Cocoa Industry Ltd, Financial Access, 57 Chocolate, Ghana CSOs Cocoa Platform (GCCP) and Solidaridad, to showcase a variety of goods and services to participants.

The EU Ambassador to Ghana, Irchad Razaaly, reiterated the commitment of the EU to support a sustainable cocoa production in the country.


He said the country’s efforts towards sustainability were fully aligned with the EU priorities to provide decent living income for cocoa farmers.

“It is also to ensure sustainability in the value chain. The European Commission in September 2020 launched an inclusive dialogue on sustainable cocoa production.

“This is what has been described as cocoa talks being executed between Ghana and Côte d’Ivoire,” he said.

He said the EU was also supporting COCOBOD for the role out of the cocoa management system which was a sensitisation campaign to train agriculture extension officers.

The Minister of Lands and Natural Resources, Samuel Abu Jinapor, said cocoa, for Ghanaians, was not just a cash crop that contributed significantly to the economy, but also, a historic commodity that formed part of the country’s heritage.

He said with the crop being cultivated in nine out of the 16 regions of the country, the lives and livelihoods of many people depended on the value chain of this commodity.


Mr Jinapor said in spite of its importance and contribution to socio-economic development, cocoa farming expansion had become a major driver of deforestation and forest degradation.

“While promoting production, we must do so in a manner that does not destroy our lands and forests which supports the lives of billions of people across the globe.

“As population grows, competition for land across the various sectors, such as agriculture, forestry, mining, human settlement, infrastructural development, ecological sites, among others, is inevitable”, he said.

The minister stated that there was, therefore, the need to create a balance between all those competing land uses without compromising the land’s ability to sustain the benefit flows for current and future generations.

“Unlike many of the former British colonies, land in our country is mainly owned by stools, skins, clans, families and individuals, with the government controlling only about 20 per cent of lands acquired from stools and families,” he said.