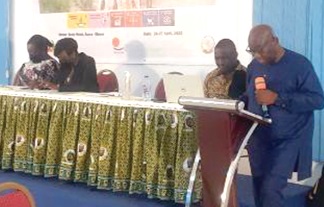 The Trades Union Congress (TUC) has launched a migrant recruitment advisory (MRA) platform to protect migrant workers from abusive employment practices.
The MRA is an online tool for addressing issues of exploitation and fair recruitment of migrant workers, including the protection of their rights and lives.

The platform also allows migrants to provide reviews of recruitment agencies, share work experiences at their respective locations and learn about their rights as workers.

Currently available in some countries in Asia and Africa, the fair recruitment initiative of the International Labour Organisation (ILO) supported the TUC to launch the portal in the country.

Othe countries using the technology are Indonesia, Nepal, The Philippines, Malaysia and Kenya.

It will be launched in Nigeria, Uganda, Ethiopia, Senegal, Mali and Benin by the end of the year.

The Deputy Secretary-General of the TUC, Joshua Ansah, said the introduction of the platform was timely, since recruitment processes had become technologically based.

He said the tool would ensure that necessary actions in the recruitment of migrant workers were taken, in line with the mandate of the TUC.

“The actions and inaction of some unscrupulous agencies create precarious conditions for migrant workers and lead them into forced labour.

Given this situation, a practical action that will take the interest of migrant workers into consideration in their recruitment is the MRA,” he added.

For his part, the Deputy-General Secretary of the International Trades Union Congress (ITUC), Africa, Joel Akhator Odigie, said the MRA worked in the interest of migrant workers around the world.

He said his outfit was considering improving the platform to ensure that users would be able to access the MRA, without the use of the Internet, to enable migrants to upload their experiences and concerns easily onto the system.

He, therefore, advised migrant workers to actively use the platform, since their responses would help do away with human rights abuses, death and exploitation.

The Director in charge of Policy at the Ministry of Employment and Labour Relations (MELR), Emma Ofori Agyeman, who launched the platform in Accra, lauded the initiative by the TUC and stakeholders and said it would protect the rights of migrant workers in and outside the country.

She said it would also build a vibrant and ethical community of migrant workers and eradicate the exploitation and abuse of workers.

Ms Agyeman, however, called on stakeholders to include local languages on the platform and also educate workers on how to use the system.