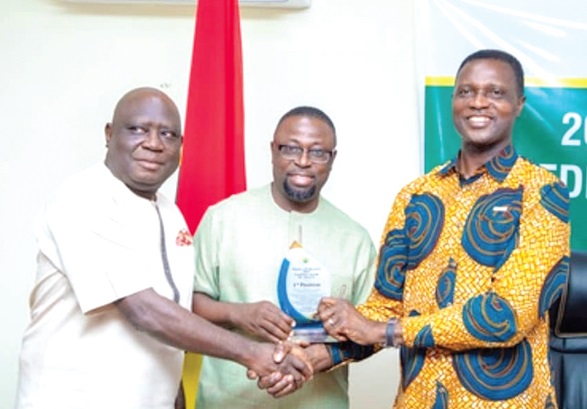 CTVET is OveThe Commission for Technical and Vocational Education and Training (CTVET) has been adjudged the Overall Best Agency under the Ministry of Education for the 2021 performance year and was presented with a citation in its honour.
The award follows an outstanding achievement as the Best Performing Agency in the implementation of their roadmap in line with their 2021 performance agreement.

It beat 12 other agencies under the Education Ministry in an annual evaluation exercise conducted by a team of consultants led by Professor Jophus Anamoah Mensah, an astute educationist.

The National Teaching Council and Students Loan Trust placed second and third, respectively, and were also presented with citations in their honour.

Speaking at the annual performance contract signing meeting in Accra on Friday, Dr Yaw Osei Adutwum lauded the award winners for their dedication and hard work that led to the attainment of such a great feat.

He urged those who could not win any award during the period to redouble their effort and strive to go the extra mile towards the attainment of laurels in subsequent evaluation exercises.

Dr Adutwum hinted that henceforth the performance contract was going to be the responsibility of the Board of the Agencies and not the management.

That, according to him, would lead to very effective supervision and efforts towards the attainment of the Key Quality Indicators (KPI) set in their performance contract for the year.


The Director-General of CTVET, Dr Fred Amoah Kyei, thanked the minister for the award and pledged to work extra hard to help bring development into all their activities.

He stated that the Commission had put in place measures to ensure that there was a deep relationship between the TVET institutes and industry so that students could be allowed to embark on scheduled industrial attachment to enhance their training.