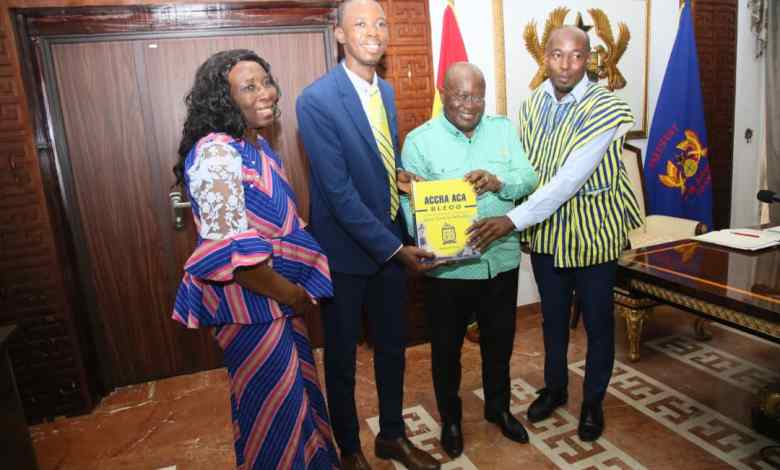 President Akufo-Addo has suggested to members of the Academia to take a stronger interest in documenting the history of the country and its institutions and not to leave the endevour in the hands of foreigners.
Addressing a delegation from Accra Academy at the Jubilee House, today, 15 August 2022, when they paid a courtesy call on him to present a copy of a newly authored book on the history of Accra Academy, entitled “Accra Aca Bleoo: History of The Accra Academy from James Town to Bubiashie”, President Akufo-Addo, said the initiative of the author, Simon Ontoyin, must be emulated by other Ghanaians.
“I am overwhelmed by this, this is an excellent initiative. Unfortunately, we still don’t do enough of our own history. Up till today, much of the history of Ghana is been written by others and not by ourselves”.
“So to see this endevour succeed and come in this way, for me, is very heartening and encouraging” President Akufo-Addo said.
President Akufo-Addo in the meeting with the Accra Academy delegation
Akufo-Addo & Accra Aca
Simon Ontoyin, author of, “Accra Aca Bleoo (History of the Accra Academy, from James Town to Bubiashie), in his remarks, told the story of President Akufo-Addo’s short stint at Accra Academy, as a teacher and the relationship the President’s father Edward Akufo-Addo and his maternal grandfather, Dr J.B. Danquah, had with Accra Academy.
“Your Excellency, it is public knowledge that you taught at Accra Academy for 6 moths upon your return from Britain before proceeding to the University of Ghana. In writing this book, I interviewed one of the students you taught at Accra Academy, Jonathan Simons, now settled in the United States of America”.
“Perhaps his name rings a bell. He remembers that you once taught the class the British law of Primogeniture, that is to say, how Kings and Queens are selected to the British Throne”.
“What is particularly interesting is that this student of yours was also your schoolmate at the Government Junior Boys School at Adabraka in the 1950s (you were two years ahead of him)” Simon Ontoyin said.
“Your connection with Accra Academy, however, precedes that of the early 1960s when you taught at the school. It may interest you to know that when you were about 12 years old your father Mr. Edward Akuffo-Addo was appointed to the first constituted Board of Governors of the Accra Academy”.
The Accra Academy delegation in a group picture with President Akufo-Addo after the presentation
“Earlier still when you were about 7 years of age, your grandfather, Dr. J. B. Danquah was appointed to serve on the first Board of Management of the Accra Academy. This was in 1951 under the chairmanship of Mr. James Godfrey Tetteh O’baka Torto”.
“So, your Excellency both your father and grandfather have served on our school board in times past and have no doubt contributed their quota to its success” the author added.
Free SHS advocacy
Headmaster of Accra Academy, Emmanuel Ofoe Fiemawhle, in a brief statement, noted that the Free SHS policy of government, has turned around many lives and that whatever the President can do within his power, to sustain the policy, ought to be done.
“The policy of the free SHS, honestly, it has turn around many lives. I will plead with you that whatever it takes to get the policy moving and to be sustained, your excellency, please, we want you to do whatever is within your powers to help this policy to be sustained”.
In defence of Free SHS policy
In his response to the comments of the headmaster, President Akufo-Addo said “the headmaster has put the icing on the cake by the strong advocacy for the free SHS system that we have in the country today”.
“I am very happy because every now and then, I am surprised when I hear that there are elements within the educational structure and CHASS, who sometimes has reservations about the policy or are opposed to it” Akufo-Addo said.
“So to have the headmaster of a school as important as Accra Academy, so forcefully advocate for the free SHS, I think the merits of it are obvious”.
“God willing, we will transform our own destiny with this initiative (Free SHS) and that, every young Ghanaian would have access to school at the secondary level” he added.

90th anniversary
Justice Jones Victor Mawulorm Dotse, Justice of the Supreme Court, and Chairman of the Accra Academy Governing Board, when he took his turn to address the President, extended the school’s invitation to him for its 90th anniversary celebration scheduled to take place on the 29 October 2022.
He added that the school will follow through with official communication to the office of the President through the Education Minister’s office.
The management and staff of the school, he said, will be honoured to have the company of the President at the climax of their 90th anniversary.