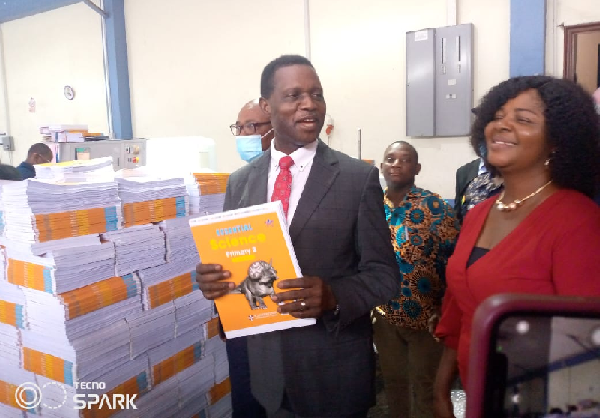 The Minister of Education, Dr. Yaw Osei Adutwum, has lauded Ghanaian printing company, Appointed Time Printing (ATP) Limited, following its production of the first batch of science textbooks for basic schools across the country.
ATP a subsidiary of the Jopsong Group of Companies (JGC), was awarded a contract by the government to print science textbooks for basic schools under the new curriculum while other local printers were also contracted to print other subjects.

Dr. Osei Adutwum said ATP has shown that the printing of government textbooks can be done in the country and by local printers.

He made the commendation while paying a working visit to ATP’s head office in Accra on Wednesday, July 6, 2022.

“I am very happy and satisfied with the printing job done by Appointed Time Printing. And I am even more impressed with the state-of-the-art printing machines imported by the company to use in its printing operations,” he stated.

“The Akufo-Addo administration made it a policy that all government textbooks should be printed in the country, and ATP has indeed demonstrated printing made-in-Ghana,” he said.


He reiterated President Akufo-Addo’s policy to ensure improvement in education, and therefore, the urgent need for textbooks to be made readily available for all basic schools throughout the country.

The minister also lauded ATP for employing Ghanaians in its operations.

For his part, the Head of Marketing of Appointed Time Printing Ltd., Mr. Charles Aidoo, expressed appreciation to the Education Minister for his visit.

He said that his company was expected to print over 600,000 science textbooks, but was quick to reveal that “as we speak now, we are about 50% through.”

He was confident that by the end of August, his outfit would finish the production of the textbooks.


This, according to him, was because of the huge investment made into equipment by his company.

“It has been our plan to complete production ahead of the timelines set for us. That will ensure that the textbooks get to the schools early enough to enable our school children get the textbooks and study,” he indicated.

He said the first batch of textbooks will be distributed to Greater Accra, Volta and Central Regions, adding that each of these regions has a specific quantity that will be supplied.

“Yes, we are 50% through with the job, but we are still printing, folding and distributing. So as and when the drivers come the ones which are ready will be delivered to them for distribution,” Mr. Aidoo noted.

In late May this year, the government through the Ministry of Education contracted 5 local printers including ATP to print government textbooks for basic schools across the country.
Under the contract, both the publishers and the printers were given 120 days to deliver. ATP was selected to print about 750,000 science basic school textbooks, which production commenced in June 2022.

The company aims to finish production by end of August 2022.