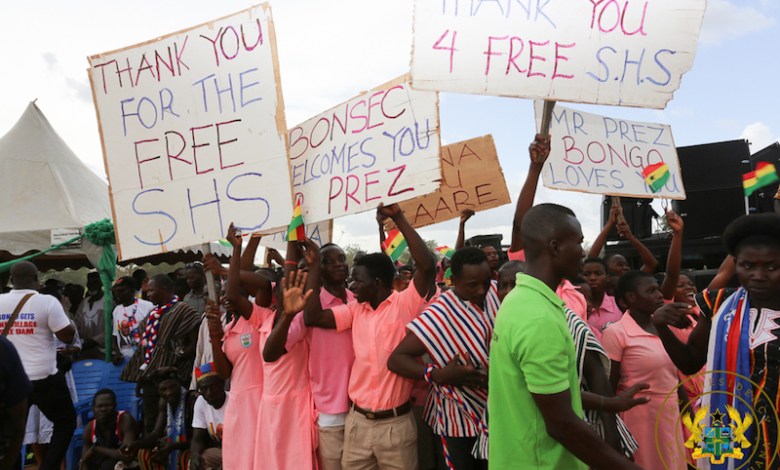 Students brandish placards praising Free SHS
Dr John Kwakye, the director of research at the Institute of Economic Affairs (IEA) wants the Free Senior High School (SHS) programme to be reviewed to allow rich parents to pay for their wards’ fees.
According to Kwakye, this could help lessen the fiscal pressure on the government in the wake of the economic challenges facing the country.
“I am not against Free SHS because human capital creates fiscal capital… but if some people can afford its payment then let them pay or we can even do cost-sharing,” the economist said on The Asaase Breakfast Show on Thursday (16 June).
Dr John Kwakye
“Why is the government taking care of all these responsibilities? Is it because it wants to be popular? The purse is not limitless,” Kwakye told Kwaku Nhyira-Addo.
He added: “It really makes no sense why the government is so adamant to pay [the fees of the wards of] parents who want to make the payment themselves.”
The director of research at IEA wants the government to seriously consider reviewing the Free SHS programme.
“This government made so many promises in order to win power and now that it realises that their implementation is not easy … I really wish government would take a second look at them.”
Watch the full interview in the attached video below:
By loading the post, you agree to Facebook’s privacy policy.
Learn more
Load post
Always unblock Facebook posts
Review of government’s flagship policies crucial to economic stability
The policy think tank IMANI Africa says the review of government’s major flagship policies is crucial to plugging wastage and subsequently stabilising Ghana’s economy.
IMANI believes most of the policies were not well thought through due to political expediency, hence the need to carry out a major review to ensure value for money.
Talking to Kofi Abotsi on TownHall Talk on Asaase Radio 99.5, the founder and president of IMANI Africa Franklin Cudjoe said until a thorough review is carried out, the economy will continue to suffer from huge investment of funds into such policies.
“We are in a crisis and yet we are not able to ask questions on the flagship programmes of the government that have swallowed much of the monies we borrowed; with this attitude how can you develop?” he asked.
“I have not seen a single report on the Free SHS policy. A report would have shown what type of education our youth are getting and how in a few years such education will impact their lives.”
“Just because a political party has said they will implement something does not mean they must be forced to do so when clearly the resources of its implementation is limited …First things first,” Cudjoe said.