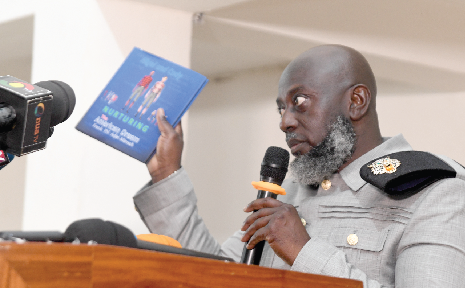 A United States of America-based Ghanaian sociologist and motivational speaker, Frank P. N. Adjei-Mensah, has called on the government to restructure the country’s educational system to focus more on entrepreneurship.
He said training young learners to be entrepreneurs would tune their mindset towards establishing their own businesses after school to reduce the high unemployment situation the country was currently grappling with.

Mr Adjei-Mensah made the appeal during the launch of his new book, “Nurturing The American”, for children aged eight and above in Accra.


The 120-page book of mostly pictorials is about two young men — Nigel and his friend Cody — who turned their toy-making hobby and creativity into assets that paid them royalties and created wealth for them.

He said the book had been evaluated and approved by the National Council for Curriculum and Assessment.

Mr Adjei-Mensah holds a Bachelor of Arts in Law and Sociology, and is the author of the American Dream Declassified.


He stated that for the book to be simple to understand, he took four years to author it, under his Ghana Dream Literacy Project.

“If children develop their entrepreneurial skills at a tender age, it would help to create wealth for them and their families as well,” he said.

He said the book was an insightful blue print that provided the nitty-gritty information on the economy, what must be done for children to reach their highest potential in the economy.

“Achieving the American Dream through problem-solving and creating value means children must be inspired to think big and to make them believe that they can make it,” he said.

Mr Adjei-Mensah said the book made pictorial and in simple language was targeted at other children engaged in the galamsey business to realize that they could save themselves from the dangerous trade they had taken and venture into a more profitable and safe business.

“If those in the galamsey business are thought how to sow boxer shorts used by all men in the world, they would make more money for themselves and earn the country currency to save the country from its current economic woes,” he stressed.

He added that if craftsmen taught such children how to make toys, the children could create jobs for themselves to earn money.