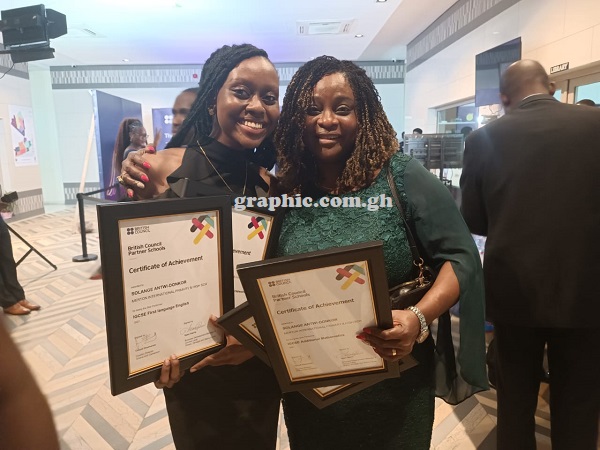 Students from British Council Partner Schools in Ghana who distinguished themselves in the 2021 Cambridge International Examination Series at the national level were last Friday (October 14, 2022) honoured in Accra.
The honours were handed out at the British Council Partner Schools Award Night based on the excellent achievement of the winners in international qualifications such as the International General Certificate of Secondary Education (IGCSE), General Certificate of Education (GCE), as well as Advanced Level (A-Level) and Ordinary Level (O-Level) Examinations.

In the 2021 examination, a student of Merton International Primary and High School, Solange Antwi-Donkor emerged as the best IGCSE student with 9A* and an average mark of 96.89 per cent.

In an interview after picking up her prizes, Ms Antwi-Donkor said she had to make a lot of personal sacrifices to achieve the feat.

She disclosed that she had to stop using her phone frequently and avoid attending some social events with her friends.

“It takes a lot of sacrifice and self-discipline, I used to sleep around 12 and wake up at 5 AM just to make time for studies, even at school I skipped lunch or studied while having lunch, so you need to make sacrifices.

Ms Antwi-Donkor who intends to pursue a career in scientific research and become a Professor in future also urged girls across the country to continue to pursue their dreams and goals.

Master Eric Owuraku Asare, a student of the Alpha Beta Christian College emerged as the Best GCE As & A Level Student for winning three Star Performer Awards in Chemistry, Information Technology and Physics.

In Ghana, the British Council currently works with 76 schools through its Partner Schools Programme, last academic year 7,000 students took the Cambridge Examinations in Ghana and the figure increased to 8,500 this year.

The British Council supports the schools with examination delivery, dedicated account management and professional development for teachers and school leaders.

In a welcome address, the Country Director of the British Council, Chikodi Onyemerela acknowledged the contributions teachers, parents and school leaders made to the success story of the winners.

He said the international curriculum had the advantage of providing global access to students that enable them to compete on the global stage.